FILE - In this Friday, Aug. 9, 2013, file photo, Federal Communications Commission Commissioner Ajit Pai speaks during an FCC meeting in Washington. The FCC is voting Thursday, Dec. 14 to undo Obama-era ânet neutralityâ rules that guaranteed equal access to the internet. The industry promises that the internet experience isnât going to change, but the issue has struck a nerve. Protests have erupted online and in the streets as everyday Americans worry that companies like Comcast, Verizon and AT&T will be able to control what they see and do online. (AP Photo/Susan Walsh, File)(Photo: Susan Walsh / AP)

NEW YORK – The Latest on the FCC’s vote on eliminating net-neutrality protections for the internet (all times local):

On Thursday, the FCC is expected to repeal net neutrality laws that are meant to ensure a free and open internet, give consumers equal access to content and prevent ISPs from favoring their own content.

FCC Chairman Ajit Pai, a Republican who says his plan to repeal net neutrality will eliminate unnecessary regulation, called the internet the “greatest free-market innovation in history.” He added that it “certainly wasn’t heavy-handed government regulation” that’s been responsible for the internet’s “phenomenal” development. “Quite the contrary,” he says.

“What is the FCC doing today?” he asked. “Quite simply, we are restoring the light-touch framework that has governed the internet for most of its existence.”

More:AP Explains: What is net neutrality and why does it matter?

“The sky is not falling, consumers will remain protected and the internet will continue to thrive,” Pai says.

The FCC meeting was abruptly halted shortly before 1 p.m. during chairman Ajit Pai’s remarks and before the vote on net neutrality could take place. Pai said “on the advice of security, we need to take a brief break.” 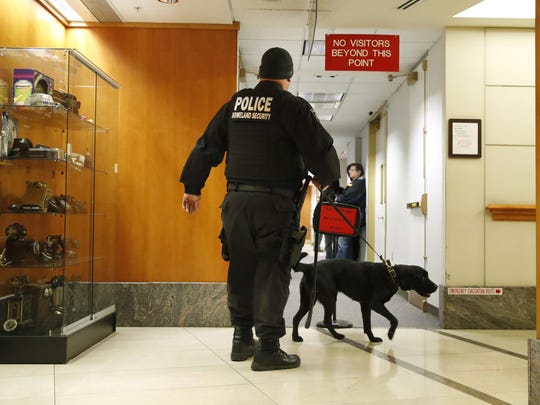 Police with Homeland Security clear a hallway outside of a meeting room where the Federal Communications Commission (FCC) was evacuated while they were about to vote on net neutrality, Thursday, Dec. 14, 2017, in Washington. (AP Photo/Jacquelyn Martin) (Photo: Jacquelyn Martin / AP)

Then the meetings’ live feed cut out. Representatives for the FCC could not immediately be reached for comment via email and phone.

Security officials evacuated the hearing room and searched it, then allowed everyone back in.

The meeting and livestream have since resumed.

O’Rielly says he is not persuaded that “heavy handed” rules are needed to prevent “imaginary harm.”

The internet, he says, “has functioned without net neutrality rules for far longer than it has without them.” The decision, he says, “will not break the internet.”

Addressing criticism that the FCC’s process was tainted by a large number of fake comments, O’Rielly said the agency is “required to consider and respond to significant comments.”

Some comments, he said, to laughter in the room, “referred to me as a potato.” He clarified that these comments had also no bearing on the agency’s vote.

Commissioner Mignon Clyburn, a Democrat who was appointed by President Barack Obama, lambasted the “preordained outcome” of the vote that she says hurts people, small and large businesses, and marginalized populations. She outlined her dissent from prepared remarks before the vote.

The end of net neutrality, she says, hands over the keys to the internet to a “handful of multi-billion dollar corporations.”

With their vote, the FCC’s majority commissioners, says Clyburn, are abandoning the pledge they took to make a rapid, efficient communications service available to all people in the U.S., without discrimination.

This item, she says, “insidiously ensures the FCC will never be able to fully grasp the harm it may have unleashed on the internet ecosystem.”

Protesters have gathered outside the office of the Federal Communications Commission as it plans to roll back “net neutrality” regulations.

The protesters want to keep Obama-era rules that are designed to prevent internet service providers like Verizon, AT&T, Comcast and Charter from favoring some sites and apps over others. Those rules have been in place since 2015.

Joining the rally was Democratic Rep. Ro Khanna, a Silicon Valley congressman who says “this is an issue for the middle class” who will “get nickeled and dimed for extra email use” or downloading videos.

Service providers have argued that the dire predictions about the planned rollback are overblown.

The federal government is preparing to unravel sweeping net-neutrality rules that guaranteed equal access to the internet. And advocates of the regulations are bracing for a long fight.

The Thursday vote scheduled at the Federal Communications Commission could usher in big changes in how Americans use the internet. It’s a radical departure from more than a decade of federal oversight.

The broadband industry promises that the internet experience isn’t going to change, but protests have erupted online and in the streets as everyday Americans worry that cable and phone companies will be able to control what they see and do online.

Opponents of the FCC’s move plan legal challenges. Some net-neutrality supporters hope to ride that wave of public opinion into the 2018 elections.