How two Baltimore distilleries are bringing rye whiskey back

Sagamore Spirit and Baltimore Spirits Co. have made it their mission to bring prominence back to Maryland’s once-beloved booze, which fell out of favor post-Prohibition and never regained its stronghold on the market.

How two Baltimore distilleries are bringing rye whiskey back 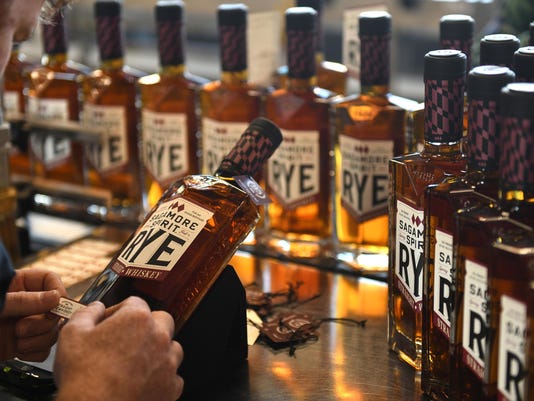 Bottles of Sagamore Spirit Rye are labeled on the production line at the Port Covington distillery.(Photo: Jerry Jackson / Baltimore Sun)

BALTIMORE — Slowly, like a spirit aging in a barrel, rye whiskey is making a comeback — and two Baltimore companies are helping lead the way.

Sagamore Spirit and Baltimore Spirits Co. have made it their mission to bring prominence back to Maryland’s once-beloved booze, which fell out of favor post-Prohibition and never regained its stronghold on the market.

While it still has a ways to go to challenge whiskey’s current king, bourbon, Distiller Magazine managing editor Andrew Faulkner said rye is on the rise. Since 2009, volume of rye whiskey has increased more than 930 percent, and last year, rye sales generated $175 million for the spirits industry, according to the Distilled Spirits Council. (For comparison, bourbon made more than $3.4 billion.)

“It is more interesting than the other whiskeys out there,” Faulkner said. “I personally believe that rye whiskey is going to return to the top of the whiskey food chain.”

Maryland-based brands that once distilled and thrived here — Wight’s Sherbrook, Hunter’s, Pikesville Rye, among many others — are no more. Many years later, the idea of returning rye to a golden age drives Baltimore’s two new spirits companies, both of which are taking very different paths toward the same goal. Recently, we checked in with them for the latest on their patient journeys.

For Sagamore Spirit, which launched in 2013 with the financial backing of Under Armour founder Kevin Plank, growth has come faster than expected, president Brian Treacy said recently inside the Port Covington distillery. (The Baltimore Sun has a long-term lease on its facility with Port Covington’s developer.)

“There were a couple of markets we didn’t necessarily plan on (entering), but if they start to call you and start to ask (for it), it’s really flattering,” Treacy said.

Those areas include Texas and California, which helped bring Sagamore Spirit products, including its flagship Signature Rye Whiskey, to a total of 30 markets this year, he said. At trade shows around the country, Treacy said, whiskey fans are intrigued to learn more about Maryland’s spirits history, which dates to the 1700s.

Others have taken notice, too. Last month, Travel + Leisure Magazine named Sagamore the No. 8 best distillery in the U.S., while The Tasting Panel Magazine recently awarded the brand’s Moscatel Barrel Finished Whiskey, with its rich notes of plum and cherry, a high rating of 96 points.

Aesthetically, the distillery is impressive to behold, with iridescent equipment at work in the fermentation room and interactive touch-screens highlighting the state’s liquor history. They’re putting it to work, too: Since opening, production has doubled to 16 hours of distilling daily, Treacy said. This has allowed Sagamore to also experiment more with limited products, including the Double Oak Rye Whiskey, a spirit whose flavors recall toasted marshmallow and a strong touch of vanilla. While the Straight Rye Whiskey was made as a softer, entry-point spirit for those who’ve written off whiskey in the past, these variants appeal to more explorative drinkers.

“People are a lot more adventurous,” Treacy said. “I think people don’t want to be ‘I drink this one thing and that’s it’ anymore.”

Despite the success, Sagamore’s critics have complained about the products’ fine print: Namely, the whiskey currently for sale was distilled in Indiana, not Maryland. With a story touting Maryland’s history, and packaging that nods to the state flag, some consider it a case of sleight-of-hand marketing.

“Our intention was never to dupe anybody,” Treacy said. “We don’t regret it. … To spend four years building a distillery and four years aging a product, and be 8-plus-years-old before you collect dollar one is not a great business plan.”

As soon as Sagamore’s distillery opened, the company stopped contract-working with the distillery MGP of Indiana, he said. Now, the Sagamore team — which has grown to 75, including a team of nine distillers — waits as its own whiskey, made start to finish in Maryland, ages in oak barrels. (One person not involved in the day-to-day operations is Plank, Treacy said. “At the end of the day, he has a full-time job.”)

In the meantime, Sagamore plans to focus next year on strengthening its presence and sales in current markets, with no plans to expand its footprint, Treacy said. The brand will also continue to release one-off products and new collaborations, but ultimately, the goal is to further hone its craft, he said.

“At this point, it’ll just be about getting more disciplined as we learn more and more,” Treacy said. “It’s a challenging market out there, so we still have a lot of work to do.”

In September, the trio of friends behind Baltimore Spirits Co. — Max Lents, Eli Breitburg-Smith and Ian Newton — celebrated a milestone in their young company’s history: They opened a new, much larger distillery at Union Collective in Medfield.

As vital as the brand’s previous home in Remington was to its development, the founders are relieved to have a facility they’re proud to show off.

“At the old spot, we had to talk (visitors) into the fact that special things were happening in this warehouse by the dump,” Lents said. “It’s amazing to finally have a space that we feel represents the quality of the spirit.”

Compared to Sagamore, Baltimore Spirits Co. is a tiny operation — a staff of three, with Breitburg-Smith as head distiller. But it’s producing huge flavors, particularly with its Epoch Rye Whiskey, which was awarded a Double Gold medal, the highest distinction at April’s San Francisco World Spirits Competition.

As the only Maryland brand to win Double Gold this year, the company seemingly announced its arrival on the craft spirits scene. Whiskey-drinkers are responding to Epoch Rye’s unorthodox recipe, which uses a large amount of malted rye, as opposed to the common unmalted variety, in its grain mixture. The result is a whiskey that hits the expected clove and spicy notes associated with rye, but mellows out with hints of vanilla and tropical fruit. It’s also the first rye whiskey produced in the city from start-to-finish in decades.

“We do the mashing, distillation and aging all in-house,” Breitburg-Smith said. “For us, it was very important to do everything ourselves.”

Now, the Union Collective facility — with new equipment such as the four-times-larger copper pot still — has allowed them to increase efficiency, and thus, output.

“It allows us to basically do what was seven days of work in two-and-a-half, three days,” Breitburg-Smith said.

The brand’s line of products, which also includes Shot Tower Gin and the mezcal-style apple brandy Fumus Pumila, can now be found throughout Maryland and Washington. By the first quarter of 2019, they’ll expand to Delaware, Illinois, Louisiana and California, Lents said.

Currently, though, the Epoch Rye quantities are smaller and in-demand, so Baltimore Spirits Co. releases bottles quarterly — which have become events at the distillery. Released at the facility’s grand opening, the third batch of just under 1,000 bottles sold out in 17 days, Lents said.

With the move came another change: a rebrand from Baltimore Whiskey Co. to Baltimore Spirits Co. While Epoch took the longest to reach consumers due to the aging process, the company released other spirits in the meantime. After Epoch was released, the founders realized their love for these products remained.

“The more we kept producing, the more we realized our passion for other stuff didn’t recede at all,” Breitburg-Smith said. “It’s never just going to be a whiskey-focused distillery.”

Still, they’re motivated to make rye whiskey and Maryland synonymous again, but on their own terms. Inspired by Baltimore’s inventive arts scene, they’re aiming not to replicate an old taste, but rather redefine what rye whiskey can taste like in 2018.

“To do justice to the creative scene (in Baltimore), it has to be new,” Lents said, “And not only new — but good.”