When it comes to mushrooms and the presentation thereof, the appropriate cooking method can be the difference between a genuinely delighted, “Yaaay!” and a disquietingly dyspeptic, “Ew,” from your assembled guests. 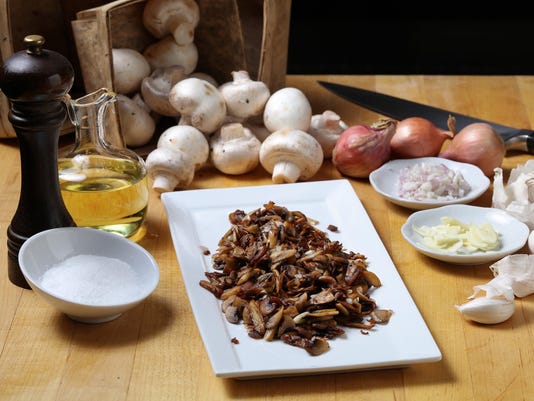 Serve your finished mushrooms immediately over a seared rib-eye, stir them into your favorite sauce or hold onto them to make omelets tomorrow morning. (Abel Uribe/Chicago Tribune/TNS)(Photo: Abel Uribe / TNS)

Remember when Alice ate that mushroom in Wonderland?

“What can all that green stuff be?’ said Alice. “And where have my shoulders got to? And oh, my poor hands, how is it I can’t see you?”

Oh, dearie, dear, dear. Poor Alice. If only she’d boned up on the works of Timothy Leary before she listened to that Caterpillar.

No bother, though, because our mushrooms are of another sort altogether, and today we’ll discuss how various levels of heat affect our scrumptious fungus.

When it comes to mushrooms and the presentation thereof, the appropriate cooking method can be the difference between a genuinely delighted, “Yaaay!” and a disquietingly dyspeptic, “Ew,” from your assembled guests. Droopy beige mushrooms may be fine when submerged in a stew, but you don’t want them on a burger. For that, you want them, as Daffy Duck would say, “thauteed to a thucculent golden brown,” when they surely are one of life’s wee boons, even absent the psilocybin.

The lingo: Let’s begin with some vocabulary: Sauter is the French word meaning “to jump.” In the kitchen, two different types of shallow pans are called “saute pans.” The sides of a sautoir are straight up and down, like an elevator to the stars, whereas the sides of a sauteuse are as sloped as the shoulders of an angsty teen. (You can impress friends with this tasty little mnemonic amuse: Sautoir ends with the letter “r,” which stands for “right angle.” Sauteuse ends with that “ess” sound, which stands for “sloped” or “slanted” sides.)

While a straight-sided sautoir is best for shallow-frying chicken and pan-searing steaks, when you’re sauteing mushrooms (or anything else), a sauteuse is just what the doctor ordered. You probably have more than one clanging from a hook in your kitchen.

Sauteing, on the other hand, with its high heat, evaporates any released water (hence the “dry heat” moniker). In this dry environment, our old pal Mr. Chemistry browns our veggies via something called the Maillard reaction. Maillard reactions begin in the mid-200-degree Fahrenheit range, above (and this is the important part) 212 degrees, the boiling point of water. Thus, if there’s water in the pan, the temperature must be lower than 212 degrees and the Maillard reactions can’t occur and your product won’t brown.

Sauteed vegetables, then, are somewhat crisp and golden brown, like autumn, whereas sweated vegetables are soft and limp and not brown at all, like a ghost dumpling. Sweated mushrooms may even look a bit gray, as if they’ve just been accused of murdering the butler.

The steps: Here’s what you do to saute mushrooms:

1. Cut mushrooms into bite-size pieces: slices, quarters, halves. If they’re small, you can saute them whole, like grasshoppers.

2. Place your sauteuse over a flame in the likes of which the souls of your mortal enemies will roast eternally. When the pan is nearly smoking, like Willie Nelson, add just enough fat to coat the bottom. (A note about fat: I love clarified butter, but any high-smoke-point oil will work: canola, peanut, grapeseed oil, etc.)

3. Spread your mushrooms evenly over the bottom of the pan, no more than two layers deep, like an “SNL” after-party. In other words: Don’t overcrowd the pan. Here’s why: Cold mushrooms cool down your hot pan, causing them to sweat instead of saute.

I really shouldn’t have slammed that third martini.

Anyway, wait a minute until the pan comes back up to temperature, then leave it a bit longer, until the mushrooms start to brown.

5. Season with salt and a grind of pepper. You could even add a bit of minced garlic or shallots.

6. When your mushrooms are nicely seasoned and brown on the bottom, toss or stir them in the pan. They’ll be done in under a minute, after which you can serve them immediately over a seared rib-eye, stir them into your favorite sauce or hold onto them to make omelets tomorrow morning.