It was a special night for the Narber brothers on Tuesday.

Kyle Narber is a redshirt junior for Millersville, while Ryan Narber is a sophomore at Shippensburg.

In their 174-pound contest, after each evaded shots from one another through the first period, it was Millersville’s Kyle Narber who notched takedowns in each of the final two periods and posted a 6-1 decision over his younger brother.

VIDEO: It was a special night for the Narber family of West York, as @ShippensburgU sophomore Ryan faced off against his older brother, @VilleMarauders junior Kyle, at 174 pounds in a @PSACsports dual meet. Kyle won, 6-1. @NCAADII@ydrcom@VilleWrestling@YDSportspic.twitter.com/KE33zzKIfP

After the match, Kyle Narber posted the following message, with some minor edits, on his Twitter site (@K_narb40).

"Wanted to say thank you to all the family members who came out (Tuesday) to watch the 'battle of the brothers,' as well as support the Millersville and Shippensburg wrestling teams.

"My apologies to anyone who I did not get to speak with after the match.

"When I refer to 'family' in this post, I'm not talking about the Narbers. It was amazing to see so much of the West York community, the BULLDOG family, make the trip.

"I've been so blessed to grow up with this amazing support system and beyond thankful for where I come from. I hope Ryan Narber and I can continue to be inspiring role models to the young Bulldogs who also came out to support (us). And to you guys, sports or not, stay on the grind and keep chasing what you love because these moments will dwindle and time will not wait for you. ... don't wait for it.

Kyle Narber was a PIAA Class 3-A state qualifier as a junior at West York, advancing to the quarterfinals. He was a three-time PIAA South Central Region Qualifier and was ranked as high as sixth in the state during his senior season by PA Power Wrestling. He posted career record of 91-48. He was a four-time letterwinner with the wrestling team and three-time letterwinner with football. He was also a two-year wrestling team captain and football team captain as a senior. At Millersville, he is majoring in art/graphic design.

Ryan Narber earned four varsity wrestling letters for the Bulldogs under head coach Brian Gross. He also earned three varsity letters in football. At Shippensburg, he is majoring in exercise science while seeking a minor in coaching. 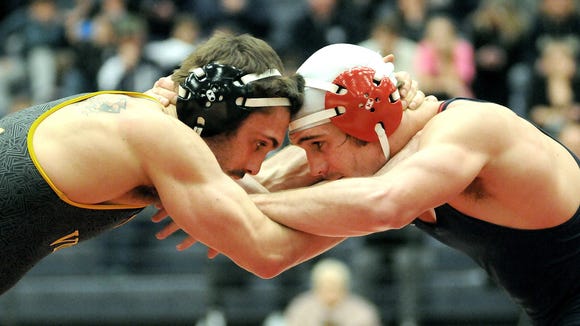 They are the sons of Robert and Richelle Narber

Krause is a California University of Pennsylvania senior third baseman.

A three-year starter, Krause led the team and ranked ninth in the Atlantic Region with nine homers last season while finishing third in the region with 107 total bases. He recorded a .382 batting average (60-for-157) and a .688 slugging percentage after entering the year with a .228 career average. He paced the team with 45 runs scored and finished second with 19 doubles and 38 RBIs. Krause received first-team all-region accolades from three major organizations last spring after earning All-PSAC West first-team laurels.

Hoover contributed on both sides of the ball for the Raiders in 2017, hitting .327 while also going 4-2 on the mound en route to All-PSAC honors. Hoover was third on the team in on-base percentage at .386 while recording 52 hits, including seven doubles and two home runs. On the mound, the lefty worked 46 2/3 innings, striking out 38 and walking 12.

Gladfelter hit .370 and recorded 70 hits, both marks good for second on the team last season. The all-conference shortstop led the Raiders in doubles with 19 and was third on the team in RBIs with 40. Gladfelter sported a .455 on-base percentage and recorded a perfect stolen base-percentage, stealing seven bags on seven attempts.