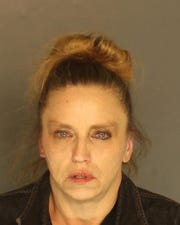 A York-area woman and man have been charged in connection to a retail theft last month at the Grocery Outlet Bargain Market in Manchester Township.

Annette Ramsey, 49,  who was identified from a surveillance photo, is charged with one misdemeanor each of retail theft and criminal mischief and a summary count of disorderly conduct, according to court documents.

She is awaiting a preliminary hearing, which has not yet been scheduled. 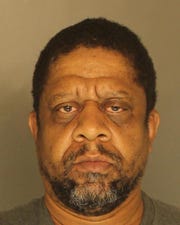 Victor Beaman, 51, was driving the vehicle Ramsey got into as she left the store, police said.

He is charged with criminal conspiracy and faces two felony counts of retail theft, a misdemeanor count of recklessly endangering another person and one summary count each of reckless driving and disorderly conduct, court records state.

Officers said the woman pictured in the surveillance photo entered the store wearing a mask as currently required. She filled her cart with over $300 worth of groceries and exited the store without paying. (Photo: Northern York County Regional Police)

The theft occurred about 2 p.m. on April 27 at the chain's Manchester Township location, located at 1500 N. George St., according to Northern York County Regional Police.

Ramsey entered the store wearing a mask as required because of the COVID-19 pandemic, police said.

She filled her cart with more than $300 worth of groceries and exited the store without paying, police said.

Police said a witness notified store employees, who followed the Ramsey into the parking lot.

When she realized she was being followed, Ramsey let go of her cart, which rolled downhill and crashed into an unoccupied parked car, officers said.

Ramsey entered the passenger side of a green Chrysler minivan, which left the area.

Spring Garden Township Police said Tuesday vehicle thefts have increased significantly in the area, with five reported as being stolen since early April.

“I would ask our residents to be attentive to suspicious activity in your neighborhood and if you do observe someone acting suspicious call 911 as soon as possible,” Chief George J. Swartz said in a news release.

Swartz reminded residents to roll the windows up, remove the keys and lock their vehicles.

West Manchester Township has resumed its public walk-in hours for the police department and administrative office.

The tax collector’s office remains closed, and it’s uncertain when it will reopen to walk-in traffic, an official said Wednesday.

The municipal complex, located at 380 East Berlin Road, had been closed to walk-in customers since the outbreak of the coronavirus crisis on March 16 until reopening Monday.

ownship officials said people must wear a mask or face covering when entering the building.

The number of people allowed in the building at one time will be limited to protect the safety of both the staff and the general public. Individuals may be asked to wait outside if they are too many inside, officials said.

The Salvation Army Eastern Pennsylvania and Delaware Division has announced Camp Ladore will not operate this summer due to the ongoing COVID-19 outbreak.

The residential youth camp located in Waymart, Wayne County, usually serves over 250 campers per week, along with a full residential staff.