For the love of trees: Website charts the biggest trees in Pa.

The "tree doctor" is not only in, he's online.

For the love of trees: Website charts the biggest trees in Pa. 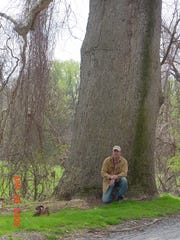 The "tree doctor" is not only in — he's online.

Scott Wade, 52, is a certified arborist who created the website Champion Trees of Pennsylvania to keep documentation of the biggest trees in the state in a way that's easily accessible to the public.

PABigTrees.com presents a list of big trees in Pennsylvania, updates on recent findings and how to measure and nominate trees.

A tree is considered a "champion" when it's the biggest known of its species within the state, according to Wade.

Wade said his love for nature began in Harmonyville, Chester County, where he was born and raised.

"There weren't a lot of kids around, so I spent a lot of time with my dog hiking in the woods," Wade said.

Trees have become his focus, but Wade said he has a passion for all of nature.

"It's just one of those things where you have an interest, and it becomes your career," he said.

Wade lives in Media, Delaware County, and has been working at Longwood Gardens for 10 years.

When Wade volunteered to be the state coordinator for the Pennsylvania Forestry Association in 2011, he decided to create a website, he said.

"The problem with books is that as soon as it's printed, it's already outdated,"

he said. "It being online keeps it alive."

Wade said the purpose of the website is to show people the history and benefits of trees as well as give people a place to keep up to date and document trees in their community.

"You can see the tree near you," he said.

For a tree to be featured on the website, it has to be considered "big" locally or statewide, according to Wade.

The american holly in 1968 along the Susquehanna River. (Photo: Pennsylvania Power and Light Company)

York County has a tree on the website, an American holly, located near the Susquehanna River outside the Indian Steps Museum in Lower Chanceford Township.

It's the largest American holly in Pennsylvania, according to Wade.

Wade said because the tree is hollow, it's hard to tell the age, but it could be as much as 300 years old.

The website so far has been run only by Wade, but he said he's in the process of turning it over to a new owner.

"I just feel like I've done all the things I want to do," Wade said. "I still want to be involved, but I want other people to have their turn." 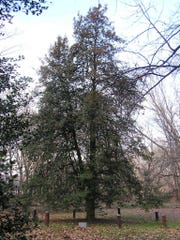 The american holly outside the Indian Steps Museum in 2018. (Photo: Scott Wade)

Aaron Greenberg, an arborist at Laurel Hill Cemetery in Philadelphia, was chosen to take over, according to Wade.

Wade said he encourages everyone to get involved with the website by nominating any tree that might be a candidate.

A few weeks ago, he discovered the biggest tree in Pennsylvania wasn't a cottonwood in Dauphin County as believed but a sycamore in Chester County that had been nominated through the website.