Nothing makes me feel better about my station in life than knowing that at least a bunch of zombies aren't gnawing at my dangling entrails.

I've twisted myself into a yoga pretzel on Zoom. I've downloaded the meditation apps. I've watched koala bear naps on the San Diego Zoo's koala cam. (OMG, the baby.) All of it has helped soothe my simmering coronanxiety to some degree, though none quite as much as streaming a film festival's worth of disaster flicks and diving into a pile of snacks.

"Armageddon." "The Towering Inferno." "San Andreas." "28 Days Later." If it in some way features the end of humanity — or a piece of humanity — I will watch it. And I will it find it relaxing. Mainly because nothing makes me feel better about my station in life than knowing that at least a bunch of zombies aren't gnawing at my dangling entrails. I'm also a Scorpio and we have dark, dark souls.

Naturally, whenever I watch, I always — always — prepare a plate, since impending doom builds an appetite. Here, I outline five very simple dishes that can be made from just about any stock of disaster rations and pair them with five of my favorite disaster films.

Consider this your disaster degustation. 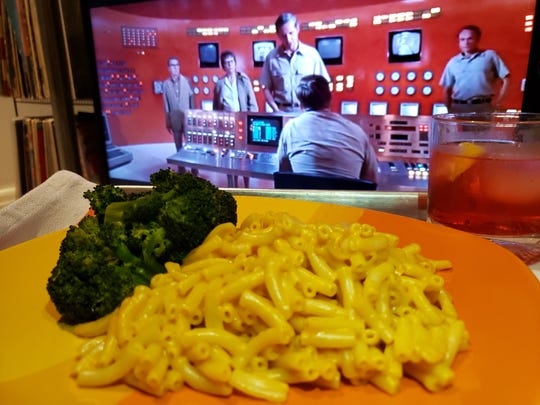 Based on the book by Michael Crichton, the plot revolves around an alien contagion that crash lands to Earth aboard a satellite and turns human innards to dust. A team of scientists take to a secret underground bunker to study the rapidly multiplying organism so that they can develop a cure. It's a race against time and a U.S. president who isn't big into science.

And it's totally worth it for the rudimentary technology, 1970s sets and Kate Reid as the lone female scientist, a sassy lady with a sensible haircut who chainsmokes and utters lines like, "I never liked red lights. It reminds me of my years in a bordello."

Watch the 1971 version. Don't mess around with any updates.

Food pairing: Kraft macaroni and cheese and steamed broccoli, accompanied by a glass of Campari and soda.

This pairing is all about aesthetics: the film's unnatural palette — those '70s reds, greens and oranges — begs for food and drink of an equally unnatural color. Kraft, with its nuclear shade of orange, and its undertones of milk protein concentrate, is just the sort of thing you might eat in an underground bunker. Campari adds color, as well as the bitter taste of certain annihilation.

Refill your Campari as often as necessary. 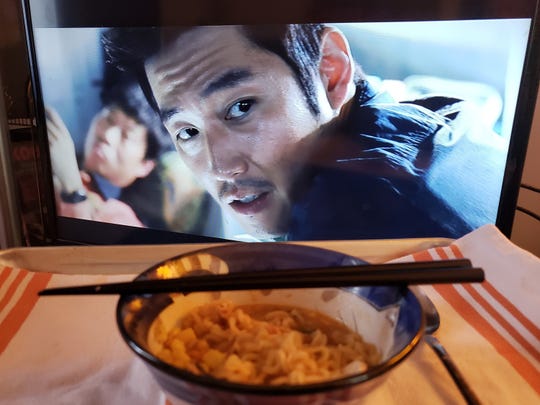 Steven Soderbergh's "Contagion," the 2011 movie that features Gwyneth Paltrow as patient zero in a flu pandemic, has been hogging the contamination movie spotlight since the novel coronavirus hit. But when it comes to flu flicks, I am incredibly partial to South Korean director Sung-su Kim's 2013 thriller, which features all the right teeth-gritting plot lines: a fast-moving, fatal virus and a single-mom doctor who is laboring to find a cure — in a race against time and an official from the World Health Organization with an itchy trigger finger.

Added bonus: Hottie actor Hyuk Jang as a charismatic rescue worker and terrifying, slow-motion coughing scenes that may lead you never to take off your N95 mask again.

It may seem glib to suggest Korean instant ramen for a Korean movie, but it's a match made in disaster heaven. One, because Nongshim instant ramen is featured in a scene that takes place inside a quarantine camp. Also, because Nongshim ramen is good, and I keep a stock of it in my earthquake kit and in my desk drawer at work. (I am prepared for all manner of disaster.) Two of my preferred flavors are Spicy Seafood Ramyun and the Shin Ramyun Noodle Soup in Gourmet Spicy flavor. The slogan for the latter is: "Nongshim Shin Ramyun can make a man cry!"

Preparation tips: Prepare as directed, then add whatever toppings you can scrounge up. My favorites include canned or frozen corn (we're in a pandemic, don't judge), sliced mushrooms, an egg and a pat of butter. Scallions, chopped cilantro and leftover bits of chicken or beef are also great. Nongshim's Gourmet Spicy version is truly spicy. And while it may not make you cry, it will clear out the congestion from your upper respiratory system. 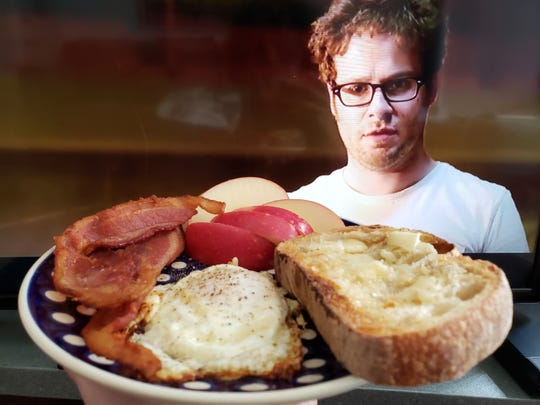 Eggs and a side of apocalypse

Movie: "This Is the End"

I thought the end of the world was going to be super-Mad Max. Instead, it's a tedium of Zoom video conference calls and celebrities singing "Imagine." Which is why I deeply appreciate the lowbrow humor of "This Is the End," the stoner-bro comedy directed by Seth Rogen and Evan Goldberg, that captures the banalities and fragile egos of a pack of callow actors as they muddle through a biblical apocalypse.

If the devil is about to consume your soul, you might as well eat all your protein in one go — like the unrepentant Danny McBride, in a key scene in the movie.

Preparation tip: Fry the eggs in the bacon grease. We can't see your too-tight pants on Zoom. Hell, we can't tell if you're wearing pants at all. 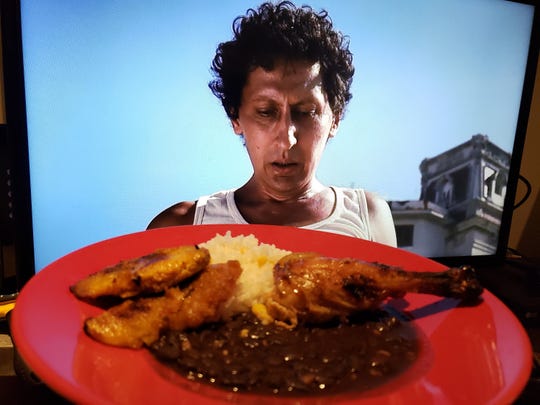 Zombie movies come in all flavors. My favorite is Cuban. In this humorous 2011 political allegory by director Alejandro Brugues, a group of rum-drinking Havana slackers face off against an army of the undead — flesh eaters they initially confuse for dissidents. The action is centered around the lanky Juan, a veteran of the Cuban intervention in Angola (wonderfully played by a deadpan Alexis Diaz de Villegas), who makes an under-the-table business out of dispatching zombies with a variety of implements, including an oar.

As he says in the film: "I'm a survivor. I survived the Mariel. I survived the Special Period and whatever came after." In other words: a few thousand brain-chewing zombies? No problem.

Food: Oven-roasted chicken with rice and beans and tostones.

A Cuban movie calls for Cuban food, a cuisine that knows how to make a lot of out of a few basic staples: rice, beans, chicken. But the critical part are the tostones: green plantains that you fry twice for a crisp-on-the-outside, soft-and-starchy-on-the-inside sweetness that will have you praising the wonder of carbs.

Preparation tips: Slice a green plantain into 1-in. thick diagonal wedges. In a broad frying pan (I use Teflon), heat enough vegetable oil to cover the bottom of the pan over medium heat. The oil should sizzle but not sputter. Fry the banana slices lightly on each side — about three-to four minutes total — and remove them when they start to soften and change color. Drain on a paper towel.

Then comes the smashing. Cut a couple of large squares out of a brown paper grocery bag. Place a piece of banana between them and use the palm of your hand to press them to about a ½-inch width. (My Mexican-Irish husband's Cuban tia swears by this method and it is generally good advice never to question the cooking methods of a Cuban tia.)

Fry for about 3 to 4 more minutes at medium heat, turning the bananas until they are golden and crisp. Salt to taste.

You are now ready for zombies. 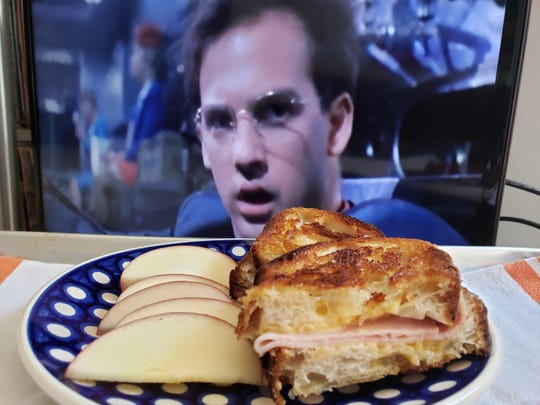 This 1988 flick by writer-director Steve De Jarnatt features a lovely young couple, played by Anthony Edwards and Mare Winningham, who meet and fall in love at the La Brea Tar Pits — because gazing upon a drowning mammoth is just the sort of thing to bestir hot pangs of desire. Their blossoming union, however, is cut short when Edwards picks up a ringing pay phone outside of Johnie's Coffee Shop on Fairfax and learns that a nuclear attack is imminent. Then it becomes a race against time to get out of L.A. before the bombs hit.

The terrible haircuts and the scenes of the Miracle Mile in the '80s make this a must-see for anyone who considers themselves an Angeleno. And, of course, there's the dialogue: as riots consume Wilshire Boulevard, Winningham declares: "Hell, I'll write an article about all this for Esquire. Someone will probably make a TV movie out of it."

Or maybe a full feature film.

Since much of the action is set around a diner, it's only right to eat diner-y food. Pancakes, burgers and watery coffee are all good options. I went with what I had on hand: ham and American cheese, the sort of cheese that will survive any end-of-the-world scenario.

Preparation tip: In grilling your sandwich, use all the butter you can. American cheese may survive a nuclear attack, but the butter definitely will not.