The best part of Netflix’s new action-“comedy” “Coffee & Kareem,” from “Stuber” director Michael Dowse, is right there in the cute, punny title. And that’s it. The title is the best part. 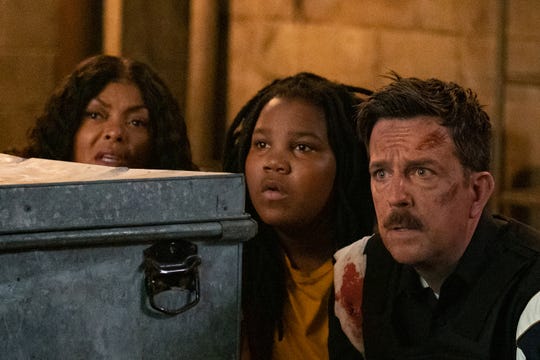 The best part of Netflix’s new action-“comedy” “Coffee & Kareem,” from “Stuber” director Michael Dowse, is right there in the cute, punny title. And that’s it. The title is the best part. One could assume screenwriter Shane Mack, in his feature debut, came up with the clever title and expanded from there, crafting a blaxploitation-inspired raunchy buddy movie.

The main comedic fulcrum of “Coffee & Kareem” is that well-worn, worn-thin writerly device: children swearing. The cherubic Gardenhigh is tasked with delivering reams and reams of dirty dialogue. Kareem, indeed, thinks his special talent is talking smack (he doesn’t say “smack,” as you could have surmised). His big mouth gets him in trouble at school, and it gets him in trouble with a few gangsters on the lam for a drug bust when he seeks out their help intimidating his mom’s cop boyfriend, who has picked him up from school that afternoon.

A meleé ensues, naturally, in which Kareem captures video on his smartphone of the gangsters murdering another police officer and even evidence of police corruption in said drug bust. Yet even more meleé ensues, repeatedly, while Coffee and Kareem hit the streets together trying to save themselves and Vanessa, until the blessed end of this noisy and annoying 88-minute caper.

“Coffee & Kareem” has a lot in common with “Stuber”: a vehicular setting, an odd-couple friendship, a hard-hitting female police officer with some things to hide (here she is played with the customary vigor Betty Gilpin brings to even the most thankless roles). The action and comedy are also similarly clumsy.

What’s so wrong with a little light, ultra-violent humor as escapism? If only the humor were humorous. “Coffee & Kareerm” whipsaws wildly between potty-mouthed material with a particular focus on reproductive organs and “edgy” jokes about police brutality that are neither funny nor trenchant. They just sort of hang in the air like bad memories. Is now, or ever, the right time to mine that collective cultural wound for laughs?

The refusal to land on a consistent tone is the downfall of “Coffee & Kareem,” in which cartoonishly shocking violence is coupled with the strange familial bonding between the titular pair. Boundary-pushing precocious naughty kid comedy can be a tricky line to walk, a line “Coffee & Kareem” doesn’t bother even toeing. It just blows the line up. The whole thing is a profoundly irritating, cacophonous mess that would be wildly offensive, except, of course, that characters always helpfully state that something is wildly offensive. Betty Gilpin deserves better. Taraji P. Henson deserves better. Ed Helms deserves better. And we do too.