In cursed ‘Dolittle,’ they could not have done less

With the exception of the successful Eddie Murphy film series that borrowed the name and conceit, faithfully adapting Dolittle is simply a cursed endeavor.

In cursed ‘Dolittle,’ they could not have done less 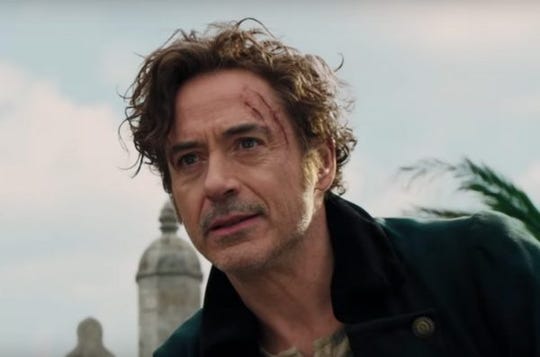 In 1967, Twentieth Century Fox undertook an expensive and complicated production of “Doctor Dolittle,” based on a series of children’s books by Hugh Lofting, about a doctor in Victorian England who talks to animals. Starring Rex Harrison, “Doctor Dolittle” was a notoriously doomed production, troubled by quarantined animals, Harrison’s behavior and a budget that ballooned three times its size. “Doctor Dolittle” received terrible reviews and tanked at the box office, though Fox was able to buy off a few Oscar trophies for special effects and song.

Refusing to learn from the past some five decades later, Universal is condemned to repeat it with their own “Dolittle,” starring Robert Downey Jr. in the title role, boasting a cool $175 million budget (or maybe more?!), plus rumors of production woes and multiple reshoots. And after getting a gander at the at-best mediocre, at-worst deeply upsetting dreck that “Dolittle” director Stephen Gaghan managed to get on screen, it’s official. With the exception of the successful Eddie Murphy film series that borrowed the name and conceit, faithfully adapting Dolittle is simply a cursed endeavor.

Do little? They could not have done less. The only appropriate adjective for this “Dolittle” is “hasty.” Everything feels slapdash and half-rendered; the plot proceeds in a fashion that could only be described as perfunctory. One hopes this is actually the third time they shot it, as everyone on screen seems to be in a stumbling daze, especially Downey as the frazzle-dazzled doctor. You’ll spend most of the movie wondering about the mysterious provenance of his half-Irish, half-Scottish accent and the rest of the time wondering if they actually dubbed his voice along with the rest of the animals.

The story finds Dolittle a hermit, shut up in his estate, grieving the loss of his wife, who disappeared on one of her adventures. One day, an intrepid young man, Stubbins (Harry Collett), and an annoying young girl, Lady Rose (Carmel Laniado), crash his pity party. Stubbins wants to help save animals, and Lady Rose wants Dolittle to save the young Queen Victoria (Jessie Buckley, not that you’d know), who has taken to her bed with a mysterious illness. Dolittle only rushes to her bedside because his land, deeded as a nature preserve, will be signed off to the treasury upon the queen’s death. Nothing like a real estate quibble to get the blood pumping.

Dolittle determines the queen’s been poisoned and sets off on an oceanic journey to acquire the necessary antidote, which is also a journey into his past and back to himself. He encounters the dread pirate ex-father-in-law King Rassouli (Antonio Banderas), outsmarts the sniveling Mudfly (Michael Sheen) and, distressingly, extracts a wind instrument from a reptile’s “impacted colon,” learning that when he helps others, he’s truly helping himself.

One of the worst tones a film can strike is “hectic” (unless that film is “Uncut Gems”). Not only is “Dolittle” hasty, hectic and harried, but worse, it is utterly halfhearted. Written by Gaghan, Dan Gregor, Doug Mand and Thomas Shepherd, the character development is negligible, the jokes unoriginal, lowest-common denominator fare. Transitions have been lost along the way, so we’re thrown from location to location with no context or any reason to care about the half-baked adventure. The only thing “Dolittle” does well is out-bomb the infamous bomb “Doctor Dolittle,” and that is one for the history books.

Rated PG for some action, rude humor and brief language.