Buck Henry, comedy icon beloved for 'The Graduate' and 'Get Smart,' dies at 89

Comedy writer Buck Henry, the legendary scribe who co-wrote "The Graduate," "Catch-22," "To Die For" and co-created the TV series "Get Smart," has died. He was 89.

Buck Henry, comedy icon beloved for 'The Graduate' and 'Get Smart,' dies at 89 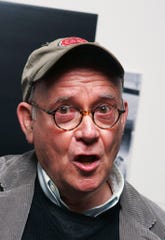 FILE - In this Nov. 28, 2006, file photo, actor Buck Henry arrives to the private screening of the "Children of Men" at the Museum of Modern Art in New York. Henry, the versatile writer, director and character actor who co-wrote and appeared in "The Graduate'' has died in Los Angeles. He was 89. Henry's wife, Irene Ramp, told The Washington Post that his death was due to a heart attack. (AP Photo/Dima Gavrysh, File) (Photo: Dima Gavrysh, AP)

LOS ANGELES — Comedy writer Buck Henry, the legendary scribe who co-wrote "The Graduate," "Catch-22," "To Die For" and co-created the TV series "Get Smart," has died. He was 89.

Henry died in a Los Angeles hospital on Wednesday after a heart attack, his wife, Irene Ramp, told The Washington Post.

A polymath of directing, acting and writing, the humorist most notably adapted Mike Nichols' seminal 1967 film, "The Graduate," starring Dustin Hoffman, and earned an Oscar nomination for the screenplay he co-wrote with Calder Wilmington. He was nominated again for co-directing the 1978 afterlife comedy "Heaven Can Wait" with the film's star, Warren Beatty.

Henry co-created TV's spy spoof "Get Smart" with Mel Brooks and the sci-fi comedy "Quark" in the 1970s, winning a Primetime Emmy Award for writing the "Ship of Spies" episodes of "Get Smart." He was later credited on the 2008 film adaptation of the spy comedy starring Steve Carell and Anne Hathaway. His other screenplays include "The Owl and the Pussycat" and "What's Up, Doc?"

The writer memorably hosted "Saturday Night Live" a then-record-setting 10 times, famously playing John Belushi's foil in the show's samurai skits and dousing the stage in waves of fake blood in the process.

"I loved listening to his fake Japanese and responding to it as though I knew what he was talking about. That was the trick of that," Henry told the TV Academy in a series of interviews posted online in 2012.

Although he liked writing in his own voice ("because then it's really my own"), Henry was equally proud of his ability to write for other people.

Though likely best known as a writer, he amassed a bevy of acting credits during his decadeslong career. Henry made a brief appearance in "The Graduate" as the hotel clerk, appeared in "Catch-22," "Grumpy Old Men," "Town & Country," which he also co-wrote, and guest-starred on "30 Rock," "Will & Grace," "Franklin & Bash" and "Hot in Cleveland."

"You can think of me however you want to," Henry told The Times in 2014 in a sprawling interview about his thoughts on showbiz and the writing process. "No part in acting distresses me except when I can't learn lines. No part of it depresses me. I don't worry about it, I don't have bad dreams about it, and when I'm on a (theatrical) run I'm deliriously happy."

The New York-born Henry Zuckerman was the son of a former Air Force general and silent film star Ruth Taylor. He arguably entered showbiz at age 2 when his mother took him to the Paramount lot to show him off.

He began his Hollywood career with a brief stint in stand-up comedy but didn't like working in places "where people drank and yelled at me." He then trained in improvisational theater and began writing for television and performing in variety shows such as "The Steve Allen Show" and "The Garry Moore Show."

"Then it got to be more and more writing — and the need to act fell away. Losing that desire was a very good thing, because it really is a desperate kind of emotion," he told The Times in that 1988 interview.

"Ultimately, it has to do with the audience, because that's the way you get approval. But there's a much deeper approval in getting there, playing with words (acting) with other people, finding a structure for behavior. It's sort of like therapy," he continued.

"Even when I was an actor, I always thought it wasn't enough. You know, traditionally, acting has been thought of as a dark art: extra-social, outside the range of what real people are supposed to do. Actors used to be just a cut above pirates. So writing always seemed to be the respectable art."