Further shaking up an already wide open awards season — and giving a boost to the kind of bold, adult-oriented studio fare that has been steadily migrating to streaming outlets — Sam Mendes’ World War I epic “1 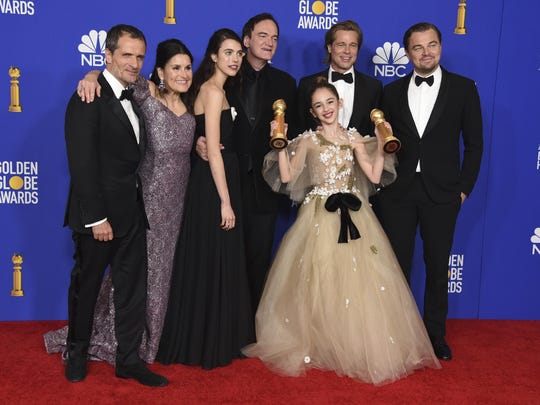 The cast and crew of “Once Upon a Time in Hollywood” pose in the press room with the awards for best motion picture, musical or comedy and best screenplay, motion picture, Sunday at the 77th annual Golden Globe Awards. (Photo: Chris Pizzello / Invision/AP)

LOS ANGELES — Further shaking up an already wide open awards season — and giving a boost to the kind of bold, adult-oriented studio fare that has been steadily migrating to streaming outlets — Sam Mendes’ World War I epic “1917” and Quentin Tarantino’s 1960s fantasia “Once Upon a Time … in Hollywood” were the big winners at the 77th Golden Globes on Sunday night.

The Hollywood Foreign Press Association gave Universal’s “1917” the award for best motion picture in the drama category as well as the directing prize for Mendes, lending the film — which opens wide Friday as one of this Oscar season’s late arrivals — a major leg up on the road to next month’s Academy Awards. The film beat out a strong field that included a trio of Netflix hopefuls — “The Irishman,” “Marriage Story” and “The Two Popes” — along with the darkly hued dark comic-book hit “Joker.”

Sony’s “Once Upon a Time” topped all other films, winning best picture in the comedy or musical category and also taking home prizes for Tarantino’s screenplay and for supporting actor Brad Pitt. A love letter to the Hollywood of yore set against the backdrop of the Manson murders, the film bested “Jojo Rabbit,” “Knives Out,” “Rocketman” and “Dolemite Is My Name.”

Accepting the award for best drama, Mendes acknowledged the risk that a film such as “1917” represents in an industry increasingly dominated by branded franchise fare and splintered by advent of the streaming. “It’s difficult to make movies without big movie stars in the leads and get people to come and see it in a cinema, and I really hope this means people will turn up and see it on a big screen for which it was intended,” he said.

True to form, the Globes spreads its affection wide, handing out significant prizes to contenders such as Warner Bros.’ “Joker” and Netflix’s “Marriage Story,” even as it left others — most notably, Martin Scorsese’s sweeping gangster epic “The Irishman” — empty-handed.

Heading into the night, Netflix — propelled by “The Irishman,” the searing divorce drama “Marriage Story” and the Vatican-set “The Two Popes” — was widely expected to dominate. The streaming giant — which has long coveted a best picture Oscar and made a concerted effort to bring A-list filmmakers into its stable — boasted 17 nominations for its films, far outpacing its nearest competitors.

The show: In an acid-tongued opening monologue that drew laughs and winces in equal measure from the starry crowd in attendance at the Beverly Hilton, host Ricky Gervais captured the anxiety many in the film industry feel as they’ve watched streaming services such as Netflix upend power structures and ways of doing business that go back a century.

“No one cares about movies anymore, everyone’s watching Netflix,” Gervais said. “This show should just be me coming out going: ‘Well done, Netflix. You win everything tonight.’”

But in the end, Netflix emerged with just a single win on the film side: Laura Dern took home the prize for supporting actress for her turn as a divorce lawyer in “Marriage Story.” On the television side as well, despite 17 nominations, Netflix had a disappointing night, earning just one award for Olivia Colman for lead actress in a drama series for “The Crown.”

Though the Globes are renowned for delivering curveballs, if not outright head-scratchers, many of the night’s winners were largely expected. Giving him a further boost in this year’s fiercely competitive actor’s race, Joaquin Phoenix won the award for lead actor in a drama for his turn as a troubled failed standup turned supervillain in “Joker.” Renee Zellweger, who is widely considered the frontrunner in this year’s lead actress race, won the award for lead actress in a drama for her performance as Judy Garland in “Judy.” 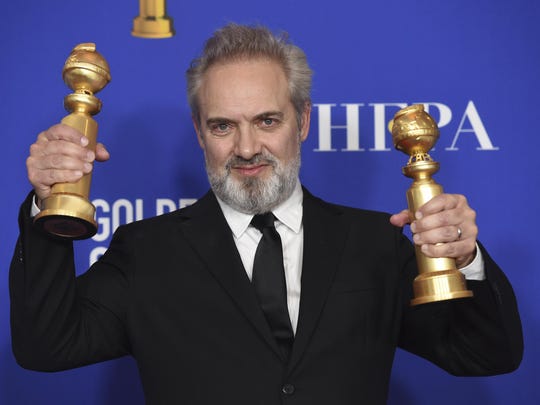 In one of the evening’s biggest surprises, Mendes took the directing prize over a heavyweight field that included Scorsese, Tarantino, Bong Joon Ho (“Parasite”) and Todd Phillips (“Joker”). Accepting the award, even Mendes seemed taken aback, saying, “There is not one director in this room, not one director in the world, who is not in the shadow of Martin Scorsese.”

Diversity: When the Globes nominations were announced last month, the HFPA drew widespread criticism for failing to nominate any female directors. Most notably, Greta Gerwig, who missed out on a directing nomination two years ago for her acclaimed debut “Lady Bird,” was again passed over for her literary adaptation, “Little Women.” (Gervais took the opportunity to skewer both the HFPA and Hollywood as a whole, suggesting that if the industry would simply go back to not hiring women as directors, the controversy would be resolved.)

The sole award for a female-directed film went to Awkwafina, who became the first woman of Asian descent to win the award for lead actress in a movie comedy or musical for her turn as a young Chinese-American woman whose grandmother has terminal cancer in Lulu Wang’s “The Farewell,” distributed by A24.

Director Bong’s genre-scrambling class satire “Parasite,” released by Neon, became the first Korean movie to win the award for best foreign language film. Having already racked up a raft of critics prizes, Bong’s film has ambitions to break out of the international-film box with a potential best picture nomination at the Oscars, but HFPA rules prevented it from competing for best drama film. Accepting the award, Bong urged viewers to expand their horizons to include more subtitled fare, saying, “I think we use just only one language: cinema.”

Actor Taron Edgerton was another surprise winner, taking the prize for lead actor in a comedy or musical for his turn as music legend Elton John in the Paramount biopic “Rocketman,” which also earned John an award for best original song. Then again, the Globes have shown a soft spot for rockers in the past; last year, the Queen biopic “Bohemian Rhapsody” won awards for best drama and for its star, Rami Malek.

Oscar watch: As a purported Oscar bellwether, one should be cautious not to read too much into the Globes, which are doled by around 90 voting members of the HFPA, rather than film industry professionals.

Then again, as awards season enters its home stretch, the Globes can give a sense of which films may have the wind at their backs; last year, the Globes winner for best comedy or musical, “Green Book,” went on to win the best picture Oscar, and the drama winner, “Bohemian Rhapsody,” also had a strong showing with four Oscar wins. That could be a particularly important factor in a year such as this one with an accelerated timeline, with Oscar nominations voting set to close on Tuesday.

On the television side, HBO topped its competitors with four wins, powered by “Succession,” which won awards for best drama series and for star Brian Cox, and “Chernobyl,” which won best limited series. “See Ricky, it wasn’t all about Netflix,” quipped “Chernobyl” star Jared Harris.

Politics: While the Globes are generally considered the loosest and booziest stop on the awards season circuit, in recent years the HFPA has worked to nudge the show toward greater respectability and seriousness. Still, against the backdrop of an impeachment battle and tensions with Iran, Gervais urged winners to avoid using the opportunity to weigh in on politics: “Most of you spent less time in school than Greta Thunberg, so, if you win, come up, accept your little award, thank your agent and your God and … off.”

While there were few overt references to President Donald Trump, a number of winners ignored Gervais’ advice, referencing the fires blazing across Australia and urging action to combat climate change. In one of the evening’s most pointedly political speech, Michelle Williams, accepting her win for lead actress in a limited series or television film, delivered an impassioned and deeply personal argument for abortion rights. “Women, 8 to 118, women it is time to vote, please do so in your own self-interest. It is what men have been doing for years, which is why the world looks so much like them,” she said.

But given the ongoing battles in Washington and in the geopolitical realm — and the far less consequential combat of awards season — Hollywood seemed to relish the chance to highlight its gentler side. Two of the industry’s most beloved figures, Tom Hanks and Ellen Degeneres, were given lifetime-achievement awards, earning standing ovations and drawing tears from the assembled crowd. Meanwhile, Pitt, in his speech, took the chance to make a plea for simple human decency amid the strife and division.

“If you see a chance to be kind to someone tomorrow, take it,” Pitt said. “I think we need it.”