'Last Christmas' worth giving your heart to

In the past couple of years, it seems we all decided to admit that those made-for-TV holiday movies starring D-list celebs were actually pretty fun to watch.

'Last Christmas' worth giving your heart to 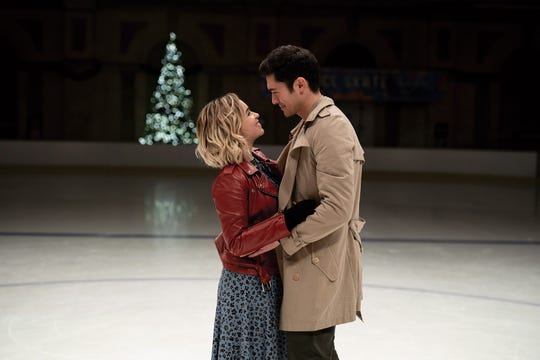 In the past couple of years, it seems we all decided to admit that those made-for-TV holiday movies starring D-list celebs were actually pretty fun to watch. Since then they've only exploded in popularity, drawing more and more stars, the networks expanding their seasonal offerings well into autumn. Christmas movies aren't just a guilty pleasure anymore, they're a bona fide booming mini-industry.

While Hollywood studios usually release a family holiday movie or two in the vein of "The Family Stone" or "National Lampoon's Christmas Vacation" each year, Emma Thompson and Paul Feig's holiday rom-com "Last Christmas" feels much more in tune with the Hallmark Lifetime approach, just with higher profile stars and a much bigger music budget.

The film is inspired by that delightfully cheesy '80s Christmas tune "Last Christmas" by Wham! It becomes a bit of a jukebox musical for George Michael's greatest hits, and there's absolutely nothing wrong with that (in fact, there better be a George Michael musical biopic in the works like "Bohemian Rhapsody" or "Rocketman"). The screenplay, by Emma Thompson, Greg Wise, and Bryony Kimmings, plugs a literal reading of the song into a "Bridget Jones"-style story with a light Brexit dusting for topicality.

Arguably two of the biggest stars of the moment, Emilia Clarke and Henry Golding, are Kate and Tom, who meet by chance outside the Christmas shop where Kate's working, dressed up in an elf costume. Imagine if Will Ferrell's "Elf" was having a day like "Bad Santa" and you'll get a sense of Kate's downward spiraling lifestyle, dragging a rolling suitcase from couch to couch, drinking alone in pubs, drowning her sorrows in full pints and one night stands. She's recovering from a near-death experience, she tells Tom, and she hasn't felt like her sunny self since she "came back."

Tom, on the other hand, is whimsical, mysterious. He finds the joy in the little things, spinning and skipping down the street, exhorting Kate to always "look up." It's a way to catch little bits of magic in the world. But it inspires Kate to have awareness of the things around her, in her community, to have a little faith, feel a little gratitude. Of course, they start to fall in something like love, or so Kate thinks.

Kate and Tom are slightly maddening in their extreme quirks for the first half of the film. Kate, in her smeared mascara and leopard coat, has a bratty attitude and can't get her life together. And Tom is just a little too Pollyanna-perfect. But that leaves them room to grow and change. And thankfully, they do.

Director Feig has built an interesting body of work over the past couple of years. And while "Last Christmas" feels much more like a Thompson film than a Feig film (rapidly wordy, delightfully goofy), he brings a swift bounciness to the material. And he surrounds Clarke and Golding with charming supporting performances, from Thompson as Kate's Yugoslavian mother and Michelle Yeoh, a surprisingly adept comic performer, as Santa, Kate's stern boss.

While it feels only slightly more elevated than your standard TV holiday rom-com fare with a twist that can be seen coming from a mile away, it's the performances and well-earned character arcs that make "Last Christmas" a satisfying holiday flick worth giving your heart to.