In 'Harriet,' Tubman gets the starry movie treatment she deserves

The incredible Tubman deserves the starry movie treatment, a cinematic rendering of her phenomenal life that goes beyond elementary school history books.

In 'Harriet,' Tubman gets the starry movie treatment she deserves

There's a coda at the end of Kasi Lemmons's "Harriet" that you almost wish was its own movie. That's how rich and exciting and important Harriet Tubman's life was, and it underscores the necessity of the film's existence, a rousing biopic of the former slave who escaped alone and led many slaves to freedom as a "conductor" on the Underground Railroad.

The incredible Tubman deserves the starry movie treatment, a cinematic rendering of her phenomenal life that goes beyond elementary school history books. Director and co-writer Lemmons (she co-wrote the script with Gregory Allen Howard) has done just that, with a remarkable performance by Cynthia Erivo in the lead.

What Lemmons and Howard impress the most in this film about a young woman battered by a brutal life of slavery is her unerring faith. Harriet has a staunch faith in God, enhanced by the mysterious "spells" she experiences, a possible result of a head injury she received as a child, where she has visions of her past and future. Her faith is what allows Harriet to press on during a harrowing journey to freedom that she undertakes alone, traveling 100 miles by foot from Maryland to Philadelphia. "Harriet" is a deeply spiritual film that asks the audience to take Harriet's experience and religious beliefs at face value, but it's fascinating to watch how Harriet's faith in God evolves and expands to include faith in herself and her own power. 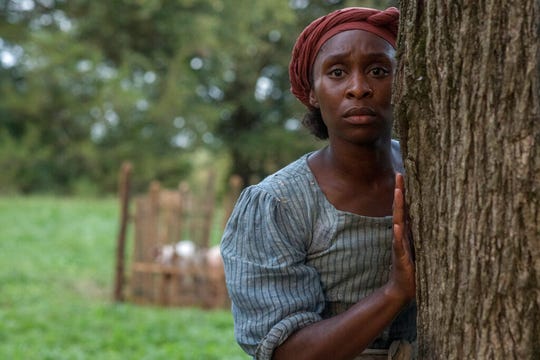 "Harriet" follows a standard template for this particular type of movie about slavery. It's generic yet inspiring, and it hits all the big, emotional moments just right. However, it's fascinating to see the way Lemmons, as a black woman, approaches the genre. She doesn't use exploitative imagery of torture or sexual violence to drive home the horrors of slavery. Lemmons uses violence sparingly, effectively, and doesn't punish the audience with gory displays. Rather, she evokes the experience of slavery through the voices of former slaves, including Harriet, who tell their stories to William Still (Leslie Odom Jr.), a black abolitionist who becomes one of Harriet's most trusted allies.

The film is at its strongest when focusing on Harriet's inner growth, following her journey as she learns to step into her power, which culminates in a powerful speech to Underground Railroad organizers in New York and in a cathartic showdown with her sadistic and manipulative former owner, Gideon (Joe Alwyn). Some of Harriet's transitional moments feel a bit rushed, but Erivo sells the physical and emotional evolution of a scared girl who becomes an empowered woman through her own sheer will and desire for justice.

Some of the supporting characters are a bit underwritten, but there are several standout performances, including Janelle Monae as a free Philadelphia woman who offers Harriet a home and work, and Henry Hunter Hall (Lemmons' son), who plays a sort of trickster slave tracker named Walter. Hall's father/Lemmons's husband, Vondie Curtis-Hall, gives a memorable performance as the plantation's preacher.

Lemmons puts Erivo's Tony-winning vocal chops to use in the coded spirituals that Harriet sings to communicate with her people, saying goodbye, hello, let's go, I'm sorry. In her first starring role, Erivo has a huge responsibility to carrying the story of Tubman's life, and she does so with hope, soul and sheer determination. Lemmons and Erivo have crafted a stirring tribute to a truly iconic American.

PG-13 for thematic content throughout, violent material and language including racial epithets.