'Yesterday' doesn't quite come together, but it's almost impossible not to like

Danny Boyle and Richard Curtis' "Yesterday" requires its viewers to take quite a few leaps of faith.

'Yesterday' doesn't quite come together, but it's almost impossible not to like 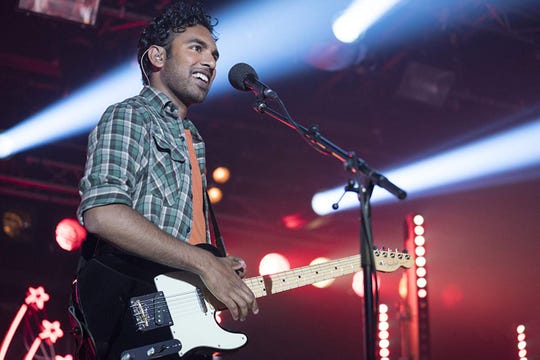 Danny Boyle and Richard Curtis' "Yesterday" requires its viewers to take quite a few leaps of faith. First, you have to wholeheartedly buy into the rule that, categorically, the best songs ever written are by The Beatles. They're great songs, to be sure. But in "Yesterday," they are revelatory, tear-jerking, Best Songs Ever, no matter the context or who is singing them. It's very high stakes, but then again, most everything about "Yesterday" is high stakes.

This heightened high-concept magical dramedy presents the idea that a weird electrical blip/solar flare causes electricity all over the world to go out while simultaneously wiping our collective consciousness clean of all traces of The Beatles. Jack (Himesh Patel), a struggling pub musician and busker, is at that moment hit by a bus (thank goodness he's wearing a helmet), totaling his teeth and his bike tire. But somehow, his memory of The Beatles remains intact. He discovers the quirk when, as a get-well gift, his pals get him a guitar. And because "a great guitar deserves a great song," he plays a few bars of The Beatles' "Yesterday," absolutely flooring his friends, who wonder when and how he wrote the tune.

Jack's the only person in the world who remembers the band (or so it seems). And so, through a series of jogs in the rain clutching his forehead, he ultimately decides to capitalize on it, sending his career into overdrive. His trajectory to the top is aided by Ed Sheeran, who is apparently now the world's best songwriter (in this timeline, Oasis does not exist, but the Rolling Stones do), and his manager, Deborah (Kate McKinnon) hears Jack's crooning and sees dollar signs.

Written by Jack Barth and Richard Curtis, the king of the British rom-com ("Love Actually," "Four Weddings and Funeral," "About Time"), "Yesterday" is a love story disguised as a high-concept music film. Jack has friend-zoned his best mate, Ellie (Lily James), and through The Beatles' music and his journey to global superstardom and back, he learns what's really important in life. But with Curtisian flair, Jack of course can't just tell Ellie, he needs to make a grand gesture that puts her in a high-pressure situation: How about the Wembley Stadium Jumbotron for a declaration of love?

Everything in the film is high: high concept, high pressure, high stakes, and it often feels bizarrely forced. Nothing makes any sense and is never explained. No one has any memory of Coca-Cola or cigarettes for some reason, either. The script wobbles underneath its own weight, but Boyle distracts from the issues with his feverish direction, characteristically throwing everything at the screen and bringing his signature sense of visual dynamism, filled with movement, light and color.

The songs? Great, of course. The story? Strange at best. The characters and aesthetic? Aces. Everyone on screen is just so likable (even McKinnon, playing the villain), especially the earnest, open Patel, in a star-making heartthrob turn featuring his crystal-clear singing voice. "Yesterday" is just so expertly directed by Boyle and perfectly cast that it's almost impossible not to like. (Joel Fry is a standout as Jack's roadie.) Even if this modern fairy tale doesn't hold up on close inspection, Boyle does his best to make sure the ride is enjoyable.