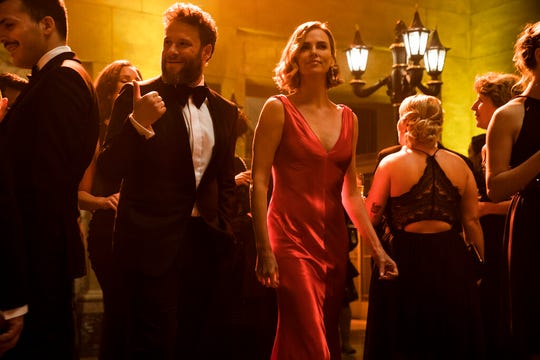 The rom-com has officially been revived, and with new releases hitting theaters and flooding Netflix, the best ones always seem to turn out to be a twist on the genre. "Long Shot," starring Charlize Theron and Seth Rogen, puts the rom into the com of Machiavellian, Washington, D.C., political machinations. It's "Veep" but less absurdly acid-tongued and a lot more swoony. Still, the incisive cultural and political commentary cuts deep, and Theron and Rogen turn out to be a winning pair.

Written by Dan Sterling and Liz Hannah, the film follows a journalist for a Brooklyn alt weekly, Fred Flarsky (Rogen), who reconnects with his middle school babysitter, Charlotte Field (Theron), who has become the youngest secretary of state ever — and an eligible, workaholic bachelorette. She taps the newly unemployed Fred to punch up her speeches as she embarks on a worldwide tour touting a new environmental initiative and embellishing her public image for a future presidential run. The unlikeliest — or perhaps likeliest, considering the context — of flings blossoms along the way.

There is of course, pop nostalgia and a whole lot of drug humor because, well, Seth Rogen, but it's a treat to see him back as the unlikely romantic lead and to see the softer side of Theron, even as she remains in a powerful role. Sterling and Hannah put this particular gender dynamic — with a powerful female politician and a male "Marilyn" (as Fred dubs himself) — to work, upending regressive beliefs about politicians and sex. Why should sex be shameful? Politicians are people, too.

The film also carefully threads the needle on the ways in which Charlotte's gender informs her work (and her compromises) and unpacks the sexist beliefs that permeate society and systems of power. It's also refreshing that "Long Shot" places monied special interests and biased media conglomerates squarely in its sights, and it does not hold back. 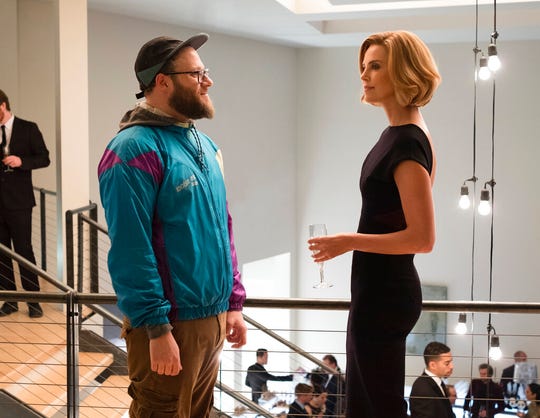 What makes "Long Shot" work is the writing, which takes place in a heightened, almost fantastical reality but always feels character-driven and grounded. This on-screen relationship is #goals, not because of grand gestures (though there are those) or steamy sex scenes (those are more funny than anything else), but because it's clear the two characters know and like each other so well just as people. Astonishingly, one of the most romantic scenes of the year could be the two pogoing in a Parisian club, high out of their minds, yelling, "I really like you!"

It's just fun to spend time with these characters, and there a few incredible supporting turns by Ravi Patel as Charlotte's bag man Tom, O'Shea Jackson Jr. as Fred's bestie Lance and a deliciously witchy turn from June Diane Raphael as Charlotte's aide Maggie, delivering lines and reactions so icily it makes one lament that she didn't have a meatier role on "Veep."

But, speaking of TV, director Jonathan Levine for some reason has chosen an aesthetic for the film that can only be described as "a very beige episode of some forgettable prestige drama." "Long Shot" is dim, dark and visually bland. Would it have killed cinematographer Yves Belanger to switch on a light or two? It just seems a shame, because this delightful comedy deserves a brighter style to match its undeniable romantic fireworks.