'The Wedding Guest' is a quirky but thin thriller

No one going to see "The Wedding Guest" should expect a rom-com.

'The Wedding Guest' is a quirky but thin thriller 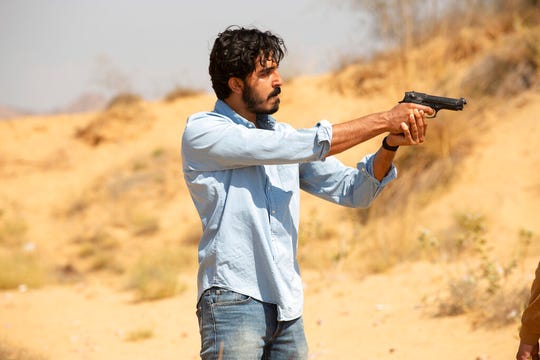 No one going to see "The Wedding Guest" should expect a rom-com.

The always-likable Dev Patel does star in it as a hunky guy who travels to a wedding party but he's not been invited and he really ruins the wedding.

That's because he's brought along not a tasteful 10-piece bakeware set as a gift for the happy couple but duct tape, fake passports, some guns and zip ties. His hope is to put the bride in his trunk.

Michael Winterbottom, the director of "24 Hour Party People" and "A Mighty Heart," has channeled Quentin Tarantino for his latest, a sparse and often quiet love story set against some of the most crowded spots in Pakistan and India.

The poster for the film is a little misleading, with Patel in full menacing mode beside an ominous looking fire (look close: Is that a body?). There is violence onscreen, but this is not "Reservoir Dogs." The trailer also pumps up the thriller aspect of the film, but it's much slower than that.

"The Wedding Guest " has actually got a thin story, but one saved by great acting and electric footage, from the rooftops in Amritsar to the crowded streets of Jaipur, as our heroine and hero travel through India, which we are told is "the perfect place to get lost."

But things don't go according to plan, and the kidnapping plot quickly unravels, forcing Jay and Samira, now weirdly teammates, to scramble. Will they become something more than captive and mercenary? Will her family and the police catch up to them?

Winterbottom's script is maddeningly thin on backstory or any revealing dialogue. We never learn why Jay is so proficient with weapons and SIM cards or what he thinks about really anything. We never learn much about Samira, either, or plumb the depths of her unhappiness.

Winterbottom seems to want us to see them just as they are now, rushing from Mumbai to Delhi to Goa, taking cars, trains, mopeds and buses. Many scenes are silent or contain just a few words. ("We have to go," is barked multiple times.) It is a film that requires careful watching to try to unlock the body language and determine if there is a double-cross or a romance brewing.

Patel and Apte have a slow-burning chemistry. Their characters didn't exactly meet-cute — remember the zip ties and duct tape? — and rushing from hotel room to bus stations isn't exactly conducive to emotional connection. Above all, they are smooth, cool, resourceful and unruffled.

Winterbottom has proven very adept at road pictures — "The Trip," ''The Trip to Italy," ''The Trip to Spain" and "On the Road" — and you might be forgiven this time for believing he's less interested in Patel and Apte than in celebrating the colors, sounds and hustle of the streets of India. The soundtrack includes Desi tunes by DJ Vips, DJ Raj and DJ Harpz.

So "The Wedding Guest" might not completely work as a thriller or a satisfying romance, but for anyone missing India or planning to go, it's a film worth getting lost in.

"The Wedding Guest," an IFC Films release, is rated R for "language, some violence and brief nudity." Running time: 94 minutes. Two and a half stars out of four.