For New Zealander comedy collaborators Madeleine Sami and Jackie Van Beek, it all started with an idea, a friendship, and one magical ingredient: Celine Dion. 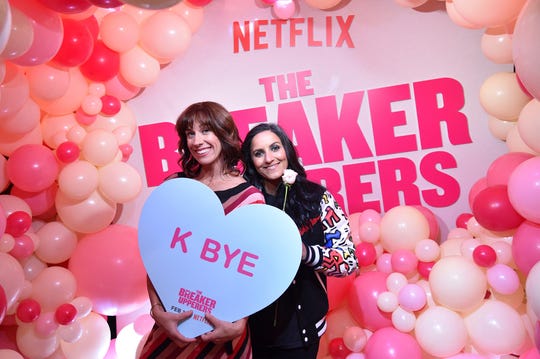 For New Zealander comedy collaborators Madeleine Sami and Jackie Van Beek, it all started with an idea, a friendship and one magical ingredient: Celine Dion.

Van Beek was making coffee one morning when she conjured the idea for "The Breaker Upperers," the duo's homegrown hit comedy film now on Netflix: Two BFFs run a service helping clients "consciously, forcibly, and irreversibly uncouple" from the partners they can't bring themselves to dump.

"I thought, 'Who's the funniest person I know in New Zealand?'" said Van Beek last year at the South by Southwest Film Festival, where "The Breaker Upperers" premiered. "And I rang Madeleine."

The two first met as teenagers at a comedy improv competition when Sami was 14 and Van Beek was 17. Both came up in New Zealand's comedy and theater scene, appearing in Kiwi crossover film hits "Eagle vs. Shark" and, later, "What We Do In the Shadows" for Taika Waititi and Jemaine Clement.

"You kind of become friends with everyone that's doing work in New Zealand because we're a country of 4 million," said the Auckland-raised Sami, perched in the back of the roving RVIP karaoke lounge last March in Austin, Texas. "You become quite tight-knit and you work on each other's work."

"And you develop the same sense of humor," added Van Beek, who hails from Wellington and went to high school with Waititi, who is also an executive producer on "The Breaker Upperers." "There's a whole set of us in New Zealand who have this kind of sensibility."

Kiwis: That sensibility might be described as quick, droll, self-deprecating and unapologetically irreverent, hailing from the Pacific island country with a population on par with all of Los Angeles. Not long ago, Kiwi talents were encouraged to tone down their Kiwi-ness, Sami and Van Beek say. Now it feels like the world is eager to embrace their culture.

"Ten years ago, people were saying, 'Are you going to soften your accent? Maybe you shouldn't write a character who's too rural, because international audiences won't understand them.' And I think it's gone completely in the other way now," said Sami.

"It's heartwarming that we're encouraged now to be specific about our culture," said Van Beek. "And it's funny because we see 'The Breaker Upperers' as, in our minds, quite a colorful, broad accessible comedy, but the American viewers still describe it as deadpan New Zealand humor. There have been big changes in the last ten years. We aren't just the people who made 'The Hobbit.'"

"There was this move to comedy, which is great, because we are crack up, hilarious people," Sami deadpanned.

"Crack up! We're a crack up culture," Van Beek said.

"We're a crack up nation." Sami paused, looking around. "You guys don't really say that here, do you?"

Chemistry: Sami and Van Beek are constantly bouncing off one another, in part due to their improv backgrounds and to the chemistry that carries "The Breaker Upperers" — a convention-upending romantic comedy about female friendship, filled with Kiwi comic talents, and packed with '90s nostalgia that translates regardless of where in the world you grew up.

Van Beek plays the cynical Jen, who channels her bitterness in life and love into running the Breaker Upperers, an agency that helps desperate clients facilitate quick (and often ridiculous) endings to bad relationships. Sami plays the more upbeat Mel, her best friend and partner whose entanglement with a young client drives a wedge into the friendship.

"Mel is a bit of a dreamer and thinks she's doing this job for the right reasons, trying to help some people; while Jackie's character is doing it probably because she's happy to see some unhappy people," Sami said.

"Jen was burned in love, and she's hurting and covering up that hurt as human beings do, with anger — and alcohol," added Van Beek. "It's very relatable."

Breaking out: The last decade has seen Kiwi comedy go global, spurred by projects such as HBO's Emmy-nominated "Flight of the Conchords" from Clement and Bret McKenzie and films including Waititi's "Hunt for the Wilderpeople," which hit U.S. theaters a year before the director made his Marvel blockbuster debut at the helm of "Thor: Ragnarok."

Now, Sami and Van Beek are poised to become the next New Zealand talents to break out, both onscreen and behind the camera. And they're doing it while blazing a trail for other women filmmakers in the process.

The collaborators had started co-writing "The Breaker Upperers" when they took the project to producer Carthew Neal and executive producer Waititi at Piki Films. Then Sami and Van Beek, who had written, produced and directed scores of projects between them, decided they would also co-direct. As Sami says, "It was time."

Behind the camera the filmmakers went one step further: They hired several female department heads and facilitated job sharing so that working moms were part of a gender-balanced crew, including producers Ainsley Gardiner and Georgina Conder of the female-forward Miss Conception Films.

"Our producers Ainsley and Georgina were both moms, so one would do half the week and then they'd tag out," said Sami, who has a baby daughter with musician wife Ladyhawke. "Head of makeup and head of wardrobe were job-sharing moms; we made a concerted effort to be like, 'We can do this.'"

"It's important to us that we're inclusive and that being a mom doesn't mean you can't make feature films in any department," said Van Beek, who has three kids with comedian Jesse Griffin. "Making feature films and having children shouldn't be mutually exclusive."

Van Beek credits her experience on "What We Do In the Shadows," where producers Waititi and Chelsea Winstanley had an area set aside so she could breastfeed, with setting a welcoming tone for working mothers on set.

"I had fangs in and I was breastfeeding my baby. After that experience, I thought, it can be no other way. And if a mother is the best person for the job — make it work."

The duo tapped a cast of comedic talents in supporting roles and cameos including Clement as a hostile date; Celia Pacquola as a woman whose marriage falls victim to the Breaker Upperers; Rima Te Wiata as Jen's over-the-top mother; Lucy Lawless as a Breaker Upperers client; and members of New Zealand vogue crew FAFSWAG.

Particularly in scenes with Scotney's character, Sepa, who was written as Samoan before the actress of Maori, German, Irish and Jewish descent was cast, Sami and Van Beek play on issues of race and otherness with a subtle self-awareness.

"Diversity was very intentional when it came to casting," said Sami. "We wrote the film like anyone could play these characters." She went on to explain her approach to skewering racism in the film, along with other preconceived notions about sexuality, female desire and motherhood.

"I'm always quite playful around race because I'm half-European and half-Fiji Indian, so my whole life, no one's ever known what I am, and I've always been subject to a lot of racism on both sides," said Sami. "I'm never white enough and I'm never brown enough, and I find it hilarious — well, I think it's good to laugh about it, and I like to send it up."

"And we delighted in mocking how Jen is slightly subconsciously racist," said Van Beek. "We really enjoyed making Jen this white woman who is so patronizing to brown people."

Netflix: Talks with Netflix began shortly after "The Breaker Upperers" debuted at SXSW, and the film was subsequently acquired by the streamer as Sami and Van Beek prepared to open the film theatrically at home.

Critics raved. It screened at the Sydney and London Film Festivals. In its first weekend in release in New Zealand, "The Breaker Upperers" outgrossed 2011 Hollywood rom-com "Bridesmaids," a locally celebrated achievement, on its way to becoming the highest grossing New Zealand-made film of 2018.

The past year has been a whirlwind. Van Beek directed two episodes of "Wellington Paranormal," a spin-off of the "What We Do In the Shadows" TV series premiering this month on FX. She and Sami are repped stateside at UTA, plan on co-directing again in the future, and are developing projects to act in together.

Which brings us to the secret weapon of "The Breaker Upperers."

No film has worked the power of French Canadian singer Celine Dion into its DNA quite like this one, in which a karaoke rendition of Dion's "It's All Coming Back To Me Now" triggers a flashback sequence filmed in the style of those cheesy, low-budget karaoke videos of yesteryear.

It's a moment so epic that Sami — who does a spot-on Dion impersonation, vocal inflections and all — has been singing the song just about everywhere that the movie has screened in the last year, including in Los Angeles on a recent stop as she and Van Beek returned to the States to promote the film's Netflix release.

"'It's All Coming Back To Me' is one of my favorite songs and one of my favorite karaoke songs," Sami said with a grin moments after delivering yet another committed rendition of the torch ballad in front of a karaoke crowd in a tiny Melrose Avenue bar, with Van Beek delivering a soulful interpretive dance alongside her.

"So much drama," she said. "It was a perfect song because it's very nostalgic and it's all about remembering something ... it's such an anthem for loss and remembering and longing."

Last summer, while the pair were in Australia with the film, they threw a video Hail Mary to their idol, inviting Dion to see "The Breaker Upperers." Russell Crowe retweeted them, and soon after, Dion's people called.

"It was amazing," said Van Beek.

"I was beside myself," said Sami.

They were flown to Melbourne to meet the singer, who had seen the trailer for the film and gave her approval. As a wise woman once sang, love comes to those who believe it. And that's the way it is.

"The last thing she said to us was, 'Keep me in mind for your next film,' " said Sami, her face lighting up. "What's better than having a Celine song in your film? Having a Celine cameo."

"A Celine cameo!" Van Beek said with a smile. "All we have to do it write it. Maybe the second film is a docu: 'Becoming BFFs with Celine.'"