It's the evening of June 5, 1944, when a small battalion of American soldiers hurtle out of a fiery cargo plane over the Normandy coast. It's an explosive opening sequence that introduces both "Overlord" and the vision of its director, Julius Avery, with quite the bang. 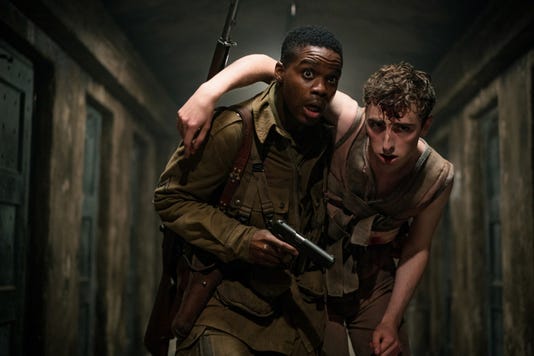 From left, Jovan Adepo stars as Boyce and Dominic Applewhite as Rosenfeld in the film, "Overlord." The movie is playing at Regal West Manchester Stadium 13 and R/C Hanover Movies.(Photo: Paramount Pictures)

It's the evening of June 5, 1944, when a small battalion of American soldiers hurtle out of a fiery cargo plane over the Normandy coast. It's an explosive opening sequence that introduces both "Overlord" and the vision of its director, Julius Avery, with quite the bang. These killer first five minutes signal we're in for a wild ride with this dark, intense and bloody take on a World War II flick. If anyone ever wished "Saving Private Ryan" were more of a B-movie splatterfest, "Overlord" is the movie for you.

We're taken on the journey through the eyes of a nervous newbie private named Boyce (Jovan Adepo), who is all wide eyes and empathy and wouldn't even kill a mouse. He's surrounded by your standard-issue WWII movie types. There's Ford (Wyatt Russell, never better), a grizzled, scarred explosives expert who's seen some things. There's the fast-talking Tibbet (John Magaro), whose bark is worse than his bite, and swaggering Sgt. Rensin (Bokeem Woodbine), who informs the boys of their mission to take out a Nazi radio jammer on a tower so planes can guide American ships to victory on D-Day.

Only a few make it through the crash landing, and soon, the GIs have taken over the home of a headstrong young French woman, Chloe (Mathilde Ollivier), who is harboring her brother Paul (Gianny Taufer) and sick aunt while enduing the affections of Nazi commander Wafner (Pilou Asbæk). Although the mission is to take down the tower, it soon becomes clear there's far more horror going on behind the walls of the Nazi command center, and our moral compass, Boyce, demands something be done about it.

Written by Billy Ray and Mark L. Smith, "Overlord" takes its cues from Quentin Tarantino's "Inglourious Basterds," using prestige war flick trappings to vandalize history books with a wild rewriting. It's gory, utopian fan fiction that imagines, "What if the night before D-Day a bunch of black and Jewish American soldiers fought off Nazi zombies?"

Avery has sprinkled references to classic Universal monster movies, '80s action-horror flicks like "The Thing" (which starred Russell's dad, Kurt), even shades of Gore Verbinski's recent Germanic sicko epic "A Cure for Wellness," with all the damp underground labs and hideous experimentation. Turn that all the way up to 11, and you have the loud, jarring and brutally violent "Overlord."

"Overlord" opens with Sarge declaring Nazis are "rotten" and "want to destroy anything good in this world." We shouldn't need the reminder, but sadly, some seem to have missed this history lesson. There's no question about where "Overlord" comes down on Nazis — there's no banality of evil here, just pure hubristic evil-evil. Think the "Raiders of the Lost Ark" Nazis, only a lot scarier.

These Nazis are rapists and torturers and murderers so caught up with their own delusions of absolute domination, they underestimate the power of a scrappy, brave, resourceful band of Americans who are willing to stand up to them. It is significant that in this vision of revisionist revenge, the ones who prevail against the Nazis are those who would be marginalized and targeted by them — along with their allies. For all its bloody cacophony, "Overlord" doesn't lose sight of that.