Like the game, 'Tag' is a whole lot of fun

Like the game, 'Tag' is a whole lot of fun 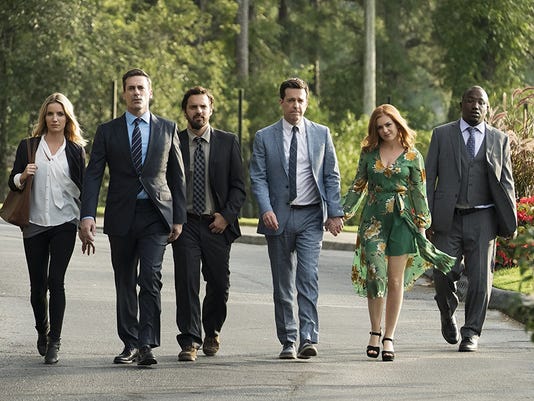 One antidote for blockbuster fatigue during the summer is a loose, lighthearted and playful comedy. Based on a 2013 Wall Street Journal article by Russell Adams about a group of friends who have played the same game of tag for 23 years, the featherweight romp "Tag" follows the stranger-than-fiction antics of a group of men who subscribe to the belief that "we don't stop playing because we grow old, we grow old because we stop playing."

With a cast of likable actors at their most lively, and some energetic directing from TV director Jeff Tomsic making his feature film debut, "Tag" is, like the game itself, a whole lot of rambunctious fun.

The script, by Rob McKittrick and Mark Steilen, focuses on the last few days in May, the month during which a group of childhood pals plays their official game of tag. The crew's unofficial booster, Hoagie (Ed Helms), lures his friends into a debaucherous weekend trip with the threat that their friend Jerry (Jeremy Renner) is planning to retire from the game. The catch? Jerry's never been tagged — he's the best the game's ever seen, and these guys are bound and determined to tag him, his wedding be damned.

From the opening scene — wherein Hoagie, a successful vet, applies for and gets a janitorial job at his friend's insurance company to infiltrate his building and tag him — we know this isn't just a normal game of tag. The crew goes to some extreme measures: costumes, booby traps, body doubles and fake-outs escalate during Jerry's wedding weekend until they've pushed it too far.

Hoagie, the self-proclaimed "heart and soul of the game," doesn't know when to stop. He's nearly maniacal in his quest to tag Jerry, but as becomes clear, it's not about the tagging. It's about being close to each other, hanging out and just playing with your friends, a seriously lost art form in adulthood.

Part of the easy fun of "Tag" is how the filmmakers just place a crew of personas into the environment and let them bounce off each other. The characters do verge on typecasting — Jon Hamm the dashing insurance man Bob; Jake Johnson the deadbeat stoner Chilli, Hannibal Buress the laconic weirdo Sable, while Renner plays the hypervigilant trainer Jerry as a cross between Jason Bourne and Neo from "The Matrix," dodging attempted tags with lightning fast martial arts moves. As Anna, Hoagie's intense wife, Isla Fisher could be an older version of her wacky "Wedding Crashers" character. But it's a treat to watch the actors do what they do best in this carefree environment. Hamm has rarely been this appealingly easygoing and jocular on screen, and it's a good look for him.

The most interesting female characters are the two women, Anna and Susan (Leslie Bibb), married to the tag team members, expressing equal mania for competition. But Annabelle Wallis, who plays Rebecca, the reporter who tags along "for the story," is essentially disposable, serving only as an exposition device. Rashida Jones is always a welcome presence, but her character Cheryl, a longtime crush of both Chilli and Bob, is only there to stir up some tension between the pals (at Jerry's devious design) and not much else.

While "Tag" doesn't get every character beat right, it nails the energy and enduring companionship the game has engendered among this group of friends. It's the kind of frothy escapist fare that goes down easy on a hot summer day, with a big old beating heart to boot.