'SuperFly' is out of touch

1972's super cool blaxploitation picture "Super Fly" was a groundbreaking entry into the gangster genre. But can the story be adapted to the world of 2018?

'SuperFly' is out of touch

Gangster movies are an incredibly useful media artifact for examining the fraught relationship between historically marginalized groups and the myth of the American dream. 1972's super cool blaxploitation picture "Super Fly" was a groundbreaking entry into the gangster genre, a bold depiction lionizing the life of a drug dealer, Youngblood Priest (played by Ron O'Neal). With the help of Curtis Mayfield's addictive theme song, "Pusherman," "Super Fly" became a cultural icon. But can the story be adapted to the world of 2018?

Mysterious music video director Director X gives it his best effort in his Hollywood studio directing debut, "SuperFly." With a script by screenwriter Alex Tse and hot young star Trevor Jackson as Priest, "SuperFly," now set in Atlanta, tries to be fly. But lacking the grit and shock factor of the original, this version is just corny and dated.

Part of that is a leading man problem. The gorgeous Jackson is just too pretty to be Priest. He's lacking the gravitas O'Neal brought to the role, even if he does sport a permed pompadour in tribute to the original Priest's relaxed 'do (the other characters mercilessly clown him for his hair).

"SuperFly" follows the original's plot structure, hitting almost every gangster movie trope along the way, because "Super Fly" helped to establish those tropes so long ago. It's one last deal before getting out of the game. Even though Priest appears to be about 23 years old, he's ready for retirement, especially with so much heat from rival gang Snow Patrol, a crew of thugs always decked out in all white (apparently they're also big fans of the 2007 emo ballad "Chasing Cars").

The film follows a checklist of references for every drug or gangster movie from the last 30 years, seemingly in conversation with its predecessors. Priest works for a dealer named Scatter, played by Michael K. Williams, and it's hard not to imagine him as an alternate timeline for his character Omar from "The Wire." There are "Goodfellas" and "Scarface" references, Mexican cartels and political corruption, and to bring it up to date, there's a police brutality subplot for Priest to "stick it to the man." But it only reminds us, queasily, just how familiar we now are with the cinematic iconography of police shootings. There's even a Rodney King visual reference, which is daring, but Tse and X don't take it further than that. 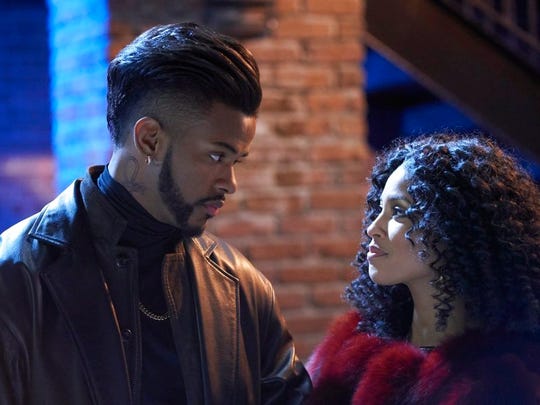 The filmmakers flirt with cultural commentary, but they seem far more interested in the fun stuff: the money, the clothes, the cars, the miles of jiggling female flesh and copious, jarring amounts of gun violence. Priest is a ladies' man, and here, he's so virile, he's in a polyamorous relationship with two women (we get a sex scene straight from Skinemax), and he spends most of his time in strip clubs — or around people who think they're in strip clubs — making it rain for random women at house parties.

The aggressive sexual objectification and other misogynistic depictions of women of color are disturbing, and it makes "SuperFly" feel out of touch. If he's the vanguard of cool, this is not cool at all. Same goes for the glorification of guns. That just doesn't fly. It all just looks like a Puff Daddy video from the late '90s, back when we weren't woke.

There are some bright spots — Jason Mitchell is far too good and far too funny for this material as Priest's right hand man Eddie, and the cast is filled with fun cameos, like OutKast rapper Big Boi as the mayor of Atlanta. The film is fascinating simply as means of examining how the genre updates itself, and for the audience reaction. But "SuperFly" is both problematic and incredibly silly, which is unfortunately a lethal combination.