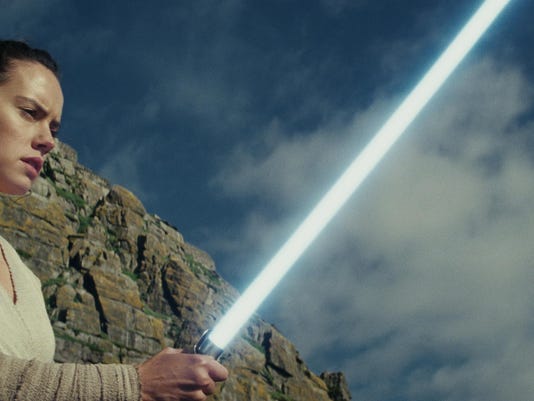 There are only two small problems. The cast has been sworn to secrecy, so beyond admitting they are part of the movie, very little information can be shared. And, the members of the media can’t ask about details as they have not been shown the movie.

But, there are times when a lot can be said without saying anything. Add that to the tiny tidbits revealed and there are a few things that are known about “The Last Jedi.” Don’t worry. None of this information is big enough to fall under the header of being a spoiler.

Here are 15 things revealed about “The Last Jedi.”

1. Look for the familiar rolling introduction. Laura Dern, who plays the new character of Vice Admiral Amilyn Holdo, says as soon as the cast saw the familiar opening for the “Star Wars” movie when they got to see the final print, everyone got excited.

2. The film continues to add strong female characters. Along with Dern’s role as the new leader of the Resistance, Tran will play the role of Rose Tico. The first film gained great praise for having Ridley’s character of Rey as the central hero.

“I knew it was a big deal, but the response was so beyond anything I could imagine. It was so monumental, the response and how people felt about it,” Ridley says.

3. The increase in strong females doesn’t phase one character. Serkis, who plays Supreme Leader Snoke, jokes that as the leader of the First Order, “Snoke is very unimpressed with the huge female force that seems to be growing in the universe.”

4. Mark Hamill is back as Luke Skywalker. How much Luke gets involved with the up-and-coming Jedi in Rey (Ridley) is a mystery.

“We are assuming that I train Rey. I have to be very careful. People say ‘was it difficult to pick up and weld a lightsaber again?’ And, I go ‘Do I?’”

The only thing Hamill will confirm is he will be in “The Last Jedi” at least twice as long as he was in “The Force Awakens.” He was in the 2015 “Star Wars” movie a total of 39 seconds.

5. The team of Rey and Finn is breaking up. One of the strongest parts of “The Force Awakens” was the relationship between the two characters. But, according to Ridley and Boyega, the two go in separate directions for “Jedi.”

Ridley says, “Because of the way people responded to John and I as a team, I was worried about not being a team not so much in this one. So I think for me personally, it was a challenge – the film was a challenge — to be in different combinations of people.”

6. There will be no Ewoks. When asked if the furry creatures from “Return of the Jedi” will make an appearance in the new film, Johnson says the only way a person will see Wicket and the gang in the movie depends on how many drugs they take before the screening.

7. More will be revealed about Kylo Ren (Driver) and General Hux (Gleeson). The background of the competition between the two major villains will be revealed. Driver praises Johnson for being able to put together a movie with so many big special effects and characters while being able to find time to provide a look at the personal stories.

8. Things aren’t going well. Despite a big victory at the end of “The Force Awakens,” the Resistance is in trouble and on the verge of being defeated.

9. The death of Han Solo (Harrison Ford) in “The Force Awakens” will impact Rey deeply. Ridley points out that in the first film, Rey had lived on her own for years and never had a real parental figure in her life. That changed when Solo came into her life.

“He was a figure that she had never dreamed of for her, and he was snatched away,” Ridley says.

10. “The Last Jedi” continues the trend of delivering messages about hope, courage, family, etc. Driver says what message the moviegoer finds in the film will be up to the individual.

“There probably will be some who will see nothing,” Driver says. “Whatever is happening in your life speaks to you in a different way than anyone else.”

11. The theme of growing up is continued. Johnson explains in all of the “Star Wars” movies the hero’s journey is not about becoming a hero, but about the transition from childhood into adulthood and finding your place in the world. That was the case with Luke Skywalker in the original trilogy, and now Rey is filling that role.

Hamill says the line that best explains his journey has been that “this is not going to go through the way you think.”

12. War is hell, even in space. Boyega points out that all of the “Star Wars” movies have dealt with war, and “The Last Jedi” explores that theme more than any of the past installments.

14. Carrie Fisher had a massive impact on all members of the cast. Each applauded how much energy, talent, spunk and humor the actress brought to the set as General Leia. Christie was a huge fan of how Fisher was changing the world before being cast to be in a film with her.

“I was first shown ‘A New Hope’ when I was 6, and I remember thinking ‘Wow, that character is really different.’ It stayed with me through my formative years that she’s really smart, really funny. She’s courageous. She’s bold. And, she doesn’t care what people think and isn’t prepared to be told what to do,” Christie says. “There was inspiration there that you could be an individual and celebrate yourself and be successful without making some big compromise.”