The multiple gold medal-winning effort by Jesse Owens at the 1936 Olympics in Berlin is one of the most important moments in sports and world history.

The multiple gold medal-winning effort by Jesse Owens at the 1936 Olympics in Berlin is one of the most important moments in sports and world history. It's a defining moment because of how Owens faced a bigotry of international proportions and came out of it as a champion.
That story is told in "Race," a film that examines the athletic accomplishments of Owens and the turbulent social and political times in which the events occurred, as suggested in the double meaning of the movie's title.
Heading into the 1936 Olympics, Jesse Owens (Stephan James) had established himself as one of the top athletes in the world. He showed blistering speed on the track and a gift in the long jump. There was no question that he would bring home gold.
The problem was that the Games were being held in Germany under the watchful eye of Adolf Hitler (Adrian Zwicker). The Germans made it clear they didn't want any blacks or Jews participating. The United States almost boycotted the Games but ended up attending after a close vote by the U.S. Olympic Committee.
Despite the committee's decision, Owens was torn between wanting to show his talents on a world stage and having to do it in a country that cultivated bigotry at such a deep and hateful level. Even the NAACP didn't want Owens to compete.
All of the events in Germany build both in the stadium and political arena. Jeremy Irons offers a solid touch as Avery Brundage, the American who became the liaison between the U.S. Olympic Committee and the Germans.
Writers Joe Shrapnel and Anna Waterhouse do a solid job of weaving together the athletics with the social issues. The blend is smooth, which means it's not jarring when Owens goes from trying to develop his skills on the track to confronting the realities of bigotry. The film's defining moment comes after the Games when a dinner is thrown in the athlete's honor and he isn't allowed to enter the building through the front door.
Director Stephen Hopkins shows more skill with the sports elements than the behind-the-scenes parts of the story. The battles within the U.S. Olympic Committee are a little dry. They also waste the talents of William Hurt, who as the head of the committee has little to do other than frown and wring his hands.
Hopkins makes up for it with both the sports segments and the quieter times when Owens deals with the pressure from so many fronts. A lot of that success comes from James. The young actor handles the athletic challenges with ease, but his real gold medal effort comes in getting across the pain, confusion, joy, hope and frustration Owens faced in a world where all he wanted to do was compete.
What knocks the movie down to a silver medal is Jason Sudeikis as Owens' coach Larry Snyder. Sudeikis doesn't make his character come to life or make viewers forget his comedic past. He's a major hurdle for the film.
Even with that failing, "Race" is as important as a movie like "Selma" or "12 Years a Slave." It presents some horrible truths about mankind with a power and grace. The film's messages are powerful and beautifully conveyed. 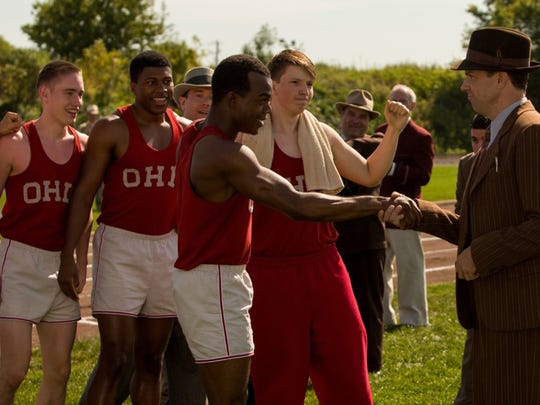