There are few films, outside of the horror genre, where a character's exterior so aptly mirrors the evil brutality... 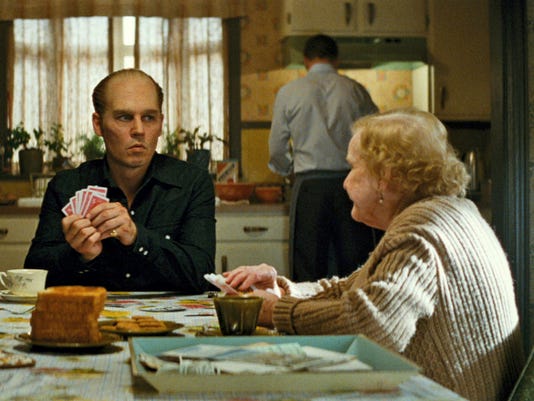 There are few films, outside of the horror genre, where a character's exterior so aptly mirrors the evil brutality within as Johnny Depp's James "Whitey" Bulger in the gripping and brutal crime saga "Black Mass." With dead, cold-blue eyes set against a cadaver of ashen, white skin, Bulger is more reptile than human, a man with neither soul nor conscience.

That Bulger really exists — he ruled the Boston underworld as the head of the Irish-American Winter Hill Gang in the '80s and early '90s — makes it all the more creepy. And while Depp's physical transformation may be an exaggeration on what the actual man looks like, his layered, chilling performance makes it disturbingly real.

Yet director Scott Cooper, who burst on the scene with the country-music drama "Crazy Heart" in 2009, doesn't just want to tell the story of Bulger's rise and fall. Based on the non-fiction book "Black Mass: Whitey Bulger, the FBI and a Devil's Deal," the film is also about FBI agent John Connolly (a terrific Joel Edgerton), a childhood friend of Bulger's who thinks he can leverage his relationship with Bulger and his state senator brother, Billy (a miscast Benedict Cumberbatch), into success for himself. His intricate dance of ambition, survival and denial, even as the walls are closing in, makes him both more relatable and pitiable than the monstrous Bulger.

Flashbacks: The film is told in flashbacks as Bulger's arrested henchmen recount to a federal agent the extent of Bulger's vicious crimes, and how he climbed his way up from the projects of South Boston to become a feared figure throughout the city and beyond. Bulger's tentacles even stretch to South Beach (where he gets involved in the backroom deals involving the betting sport of jai-alai) and Northern Ireland (where he shipped arms to be used by the IRA).

His power only grows after the FBI gets involved. Connolly thinks he can use Bulger as a bulwark against the Italian mobsters, yet, like a small planet against a powerful sun, Connolly gets sucked into Bulger's orbit, to the point where Connolly's wife (Julianne Nicholson) doesn't recognize him anymore. It's not until a new, no-nonsense FBI boss shows up (Corey Stoll) that Bulger has something to fear.

Dread: Cooper shoots the film in grays and dark tones — Boston seems perpetually overcast — and there's a gnawing sense of dread throughout. In a tense dinner scene, a seemingly playful question about a recipe curdles into a threat, exposing the undercurrent of violence that's never far from the surface.

If there's a problem with "Black Mass," it's that the general arc of the story is well-known. It's not just that Bulger's story has been widely publicized, but its details reflect the plot points of many other gangster films. From the first scene, an FBI interrogation, you know where it's going.

But it's the getting there that's the thrill. Nearly all of the performances are strong, with character actor Stoll turning in another convincing turn and Peter Sarsgaard effectively playing against type as a red-eyed Miami low-life.

But it's Depp — who has been squandering his talents with such dreck as "Transcendence" and "The Lone Ranger" for the last few years — whose character will stay burned in your memory. The scene where he comes on to Connolly's wife is so unnerving that many moviegoers may wish theaters had showers so they could wash off the ick.

In that regard, "Black Mass" is a masterful horror story, where the monster lives among us.